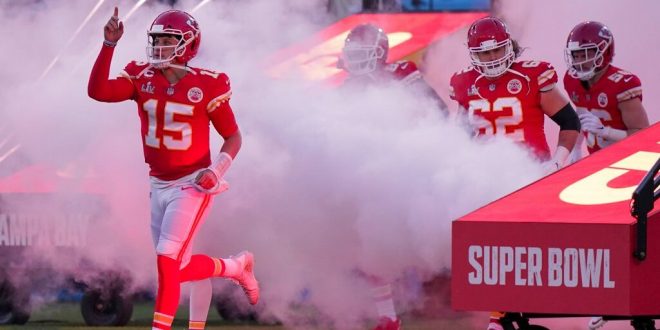 The Kansas City Chiefs 31-9 Super Bowl LV loss to the Tampa Bay Buccaneers Sunday wasn’t the ending to the 2020-21 season that the defending champs had hoped for, but it won’t stop oddsmakers from listing them as the heavy favorites to win it all next season.

Kansas City’s listing as the favorite, set at +550 in front of Green Bay and Tampa at +900. This comes after three impressive seasons from quarterback Patrick Mahomes and the Chiefs.

Check out the latest odds from @DKSportsbook for next year's #SuperBowlhttps://t.co/6qXcqd06HS

In 2018, the Chiefs fell short of the Super Bowl, but Patrick Mahomes won MVP in his first year season at the starter. The following season in 2019, Kansas City would finish as the AFC’s second seed in route to the franchises second Super Bowl championship. This season, the Chiefs earned an NFL-best 14-2 record during the regular season in route to Super Bowl LV.

The Chiefs will look to continue on this extraordinary three-year run under Mahomes and head coach Andy Reid next season, where their roster and opponents give them a good shot to make the Super Bowl for the third straight year.

Coach Reid looked back on the difficulty of the task the Chiefs have accomplished the last couple of seasons.

Kansas City went through an extensive effort last offseason to maintain the roster that carried them to the Super Bowl for two straight seasons. The team signed back their two brightest stars with tight end Travis Kelce inked to a four-year, $57 million deal and Mahomes committed to 10-year $450 million base deal. The Chiefs also retain stars wide receiver Tyreek Hill (through 2022), defensive tackle Chris Jones (2023) and Tyrann Mathieu (2021) next season as well.

This offseason, the team will have to address the expiring deals of major contributors. This includes wide receivers Sammy Watkins and Demarcus Robinson. In addition, safety Daniel Sorensen, cornerback Bashaud Breeland and fullback Anthony Sherman will also be in consideration.

Mahomes spoke on the expectations Kansas City has next season with their strong returning nucleus.

As winners of the AFC West, the Chiefs will have a first-place schedule in 2021. In addition to playing the division winners from the AFC, their schedule’s cross-conference division matchup is the NFC East. Their in-conference divisional matchup is the AFC North. Kansas City’s 2021 opponents had a combined record of 125-129-2 (.492) in 2020, tied for the 12th lowest combined opponent winning percentage in 2021.

Injuries sustained at the end of Kansas City’s Super Bowl run could also come back and affect the team next season.

Mahomes will be sidelined for “several months” this offseason because of a “turf toe” injury. Additionally, Eric Fisher may not be ready for Week 1 because of an Achilles tear suffered in the AFC Championship.