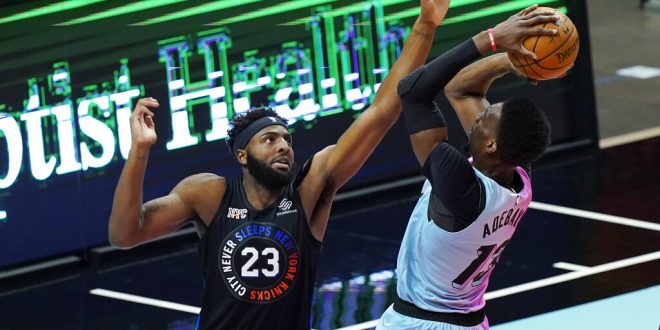 The Miami Heat held on to defeat the New York Knicks 98-96 Tuesday night, spoiling Derrick Rose’s return to the Knicks after being traded from the Detroit Pistons.

The Heat, improving to 10-14, played strong fourth-quarter defense, allowing only 14 fourth-quarter points to outlast the Knicks. New York had a chance to tie the game at the buzzer, but R.J. Barrett’s layup rolled off the rim as the final buzzer sounded.

New York, falling to 11-15, went to the free-throw line only 16 times throughout the game, compared to Miami’s 39 trips to the line.

Four starters scored in the double digits for the Heat. Jimmy Butler led the team in scoring with 26 points and dished out 10 assists, while Kelly Olynyk and Ben Adebayo had 20 and 19 points, respectively. Tyler Herro added 15 points off the bench, including the go-ahead three-pointer with 1:04 remaining.

“We’re figuring this thing out, slowly but surely,” Butler said.

Elfrid Payton led the Knicks in scoring, putting up 18 points and Barrett added 13 points and six rebounds. Rose came off the bench for New York and contributed 14 points with three assists.

Miami will begin a seven-game Western Conference road trip Thursday against the Houston Rockets, while the Knicks travel to play the Washington Wizards, Friday.