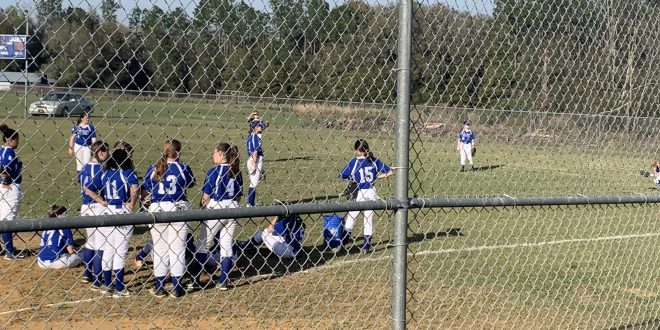 The Saint Francis Catholic Lady Wolves lead Countryside Christian by a score of 20-7 midway through the fifth inning.

The game was suspended because it was too dark to play safely. Countryside Christian, the home team, does not have lights at their field.

The game was scheduled to begin at 4 p.m. Friday. Countryside Christian had already warmed up when it was time for the first pitch. Saint Francis Catholic had not. The Wolves showed up right at 4 p.m. They warmed up for 10 minutes.

They couldn’t. The umpires were not there yet. The first umpire rolled in 45 minutes after the scheduled start time.

The game started an hour late with one umpire. The second umpire snuck into the game in the second inning and immediately started making calls.

“Hey, you just got here,” yelled a Saint Francis Catholic parent,  “you can’t make that call.”

The second umpire didn’t miss much. After two innings the Lady Wolves led 1-0.

The teams seemed a little nervous. Mistakes were made in the third leading to a total of 12 runs between the teams.

The third inning was all about running the bases.

Saint Francis Catholic took advantage of wild pitches and stole a total of four bases in the inning. Good base running helped them add eight runs and take a comfortable 9-0 lead.

Countryside Christian tried to keep up by taking advantage of the Wolves mistakes. The squad scored four runs. One of those runs was an inside-the-park home run.

To stop the Minutewomen’s run, Saint Francis Catholic freshman Lexi Bhatia delivered a nice strike to retire the side. She would finish with a total of three strikeouts.

Bring out the bats

The teams calmed down in the fourth. Wild pitches, that had previously led to stolen bases, were now hard to come by.

The Wolves were able to add two more runs.

The biggest play of the inning came from Countryside Christian eighth-grader Sam Keith who batted in two runners on her triple.

As the sun continued to fall, parents became increasingly concerned with the safety of their children.

The Wolves had four girls walk and three more were hit by pitches in the top of the fifth inning.

“This doesn’t look safe blue,” one of the parents yelled out onto the field.

But who were they talking to?

Believe it or not, the umpires were also wearing blue.

Somebody heard this parent, and the game was called in the middle of the fifth inning.

The game is not over. Saint Francis Catholic’s Head Coach, Kris McDaniel, had this to say after the game:

The teams will finish this game and then roll right into another one. The plan is to reconvene the week of March 15. Stay tuned for updates.

Trey is a second year sports media major at the University of Florida, and a high school reporter for WRUF.
@@treyboogie5
Previous Chiefland Softball Has Four Game Slide Starting the Season
Next Heartbreak as Santa Fe Basketball Falls Just Short of 4A State Title