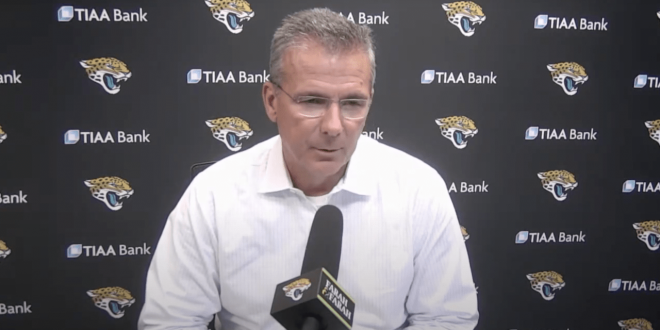 Jaguars Head Coach Urban Meyer made clear Tuesday that there are many problems that need to be fixed for the team to become a competitive threat in the NFL.

CJ Henderson Is An Integral Part

Jaguars first-round pick from the 2020 NFL Draft, CJ Henderson, had Meyer’s attention right away as he had arguably one of the best rookie debuts in club history. In total, Henderson finished with 36 tackles, six passes defended, one forced fumble and one interception while only playing eight games because of injuries.

Fortunately, Meyer said Henderson’s labrum surgery was a success and he is now rehabilitating at TIAA Bank Field.

Meyer and offensive line coach George Warhop made it clear that the team feels strongly about the direction Robinson is heading. Meyer also made sure to mention that the culture, development and talent Robinson has made it an obvious decision for the team to continue with the left tackle as a long member of the organization.

At the time of the press conference, Meyer had yet to speak with Robinson.

When discussing the rest of the offense, Meyer said that the team want to build around the player who rushed for 1,070 yards and seven touchdowns as a rookie free agent in 2020. Meyer is referring to the undrafted running back James Robinson and also mentioned him being one of the building blocks for 2021

Robinson lead all running backs with 86 percent of the team’s carries. Robinson also finished fifth in rushing yards with 1,070 despite missing the last two games of the season. The Illinois St. product averaged 4.5 yards per carry with seven TDs.

It’s notable that Robinson was the only Jags skill player who Meyer mentioned by name.

Andrew Norwell Could Be Traded

Earlier this week, it was reported that the Jaguars asked veteran left guard Andrew Norwell to take a pay cut. But none of that seems to matter as Meyer said he wants Norwell to be a part of the franchise.

Norwell played at OSU from 2010 to 2013 and Meyer was the Buckeyes’ head coach from 2012 to 2018. Norwell would go on to start 39 out of 50 games in his college career before going undrafted and signed by the Carolina Panthers.

Norwell has two years remaining on his contract.

Defensive Line Will Be Solidified

Rebuilding the team’s defensive line is one of the primary focuses for the franchise moving forward. While there are certainly holes, Meyer does feel that the team has a couple of strong players. Including third-year defensive end Josh Allen and second-year nose tackle DaVon Hamilton.

Another player Meyer made sure to mention if defensive tackle DaVon Hamilton, a player he coached at Ohio State. Hamilton contributed with 30 tackles (14 solos), two tackles-for-loss and one sack.

Beyond those two, Meyer hasn’t had a full discussion on as of yet.

The question is whether Meyer will go after a big name like JuJu Smith-Schuster or Will Fuller considering the Jaguars’ cap room, or draft a WR with one of their other early-round picks.