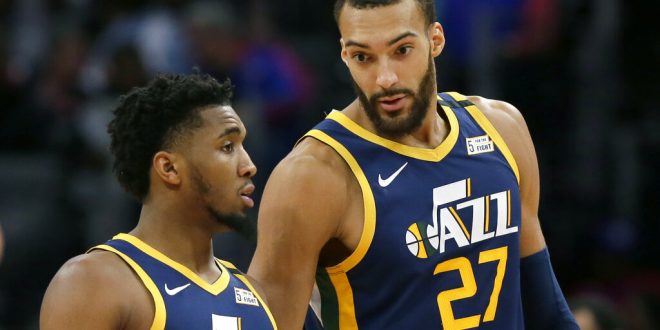 FILE - In this Saturday, March 7, 2020, file photo, Utah Jazz center Rudy Gobert (27) talks with guard Donovan Mitchell, left, during the second half of an NBA basketball game against the Detroit Pistons, in Detroit. Both players have tested positive for the coronavirus. Gobert's test result forced the NBA to suspend the season. (AP Photo/Duane Burleson, File)

The Jazz have an impressive 37-11 record going into Saturday night’s game. The one matchup between the Jazz and the Magic this season resulted in a 124-109 Jazz win in February.

In the last matchup, the Jazz’s Donovan Mitchell scored 31 points and had a field goal percentage of 52.6. Rudy Gobert had 16 rebounds.

The Magic’s former center Nikola Vucevic dominated the court for the team. He was a leading scorer for the team with an average of 24.5 points per game, 11.8 rebounds, and 3.8 assists per game. On March 25, Vucevic was traded to the Chicago Bulls along with Al-Farouq Aminu in exchange for two first-round draft picks and Wendell Carter Jr. and Otto Porter Jr..

On a recent flight, the team’s plane ran into some birds, causing an engine fire and an unexpected landing. The players were shaken up by the disturbance, and Mitchell, Utah’s leading scorer, missed the next game due to “personal reasons”. The team seems to have bounced back, however and was able to maintain their composure on the court.

The Magic have a not-so-impressive streak. 17-31. Earlier this season, the Magic suffered a long losing streak. The team lost nine straight games before breaking the unfortunate streak. The Jazz contributed one loss to the Magic’s streak. Carter and Porter, along with R.J. Hampton, are still adjusting to the new dynamic of the Magic, but they are being welcomed with open arms by the team and the fans. This new trio may be the key to improving the team.

Who else is up late with us to watch these three make their Magic debuts? #MagicTogether pic.twitter.com/ffY8S90qy8

The Orlando Magic will face the Utah Jazz again Saturday at 9 p.m.