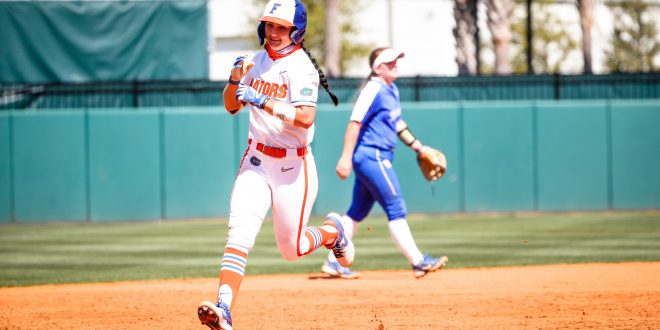 Hannah Adams rounds the bases after her solo home run in the bottom of the seventh of the Gators 4-2 loss against Kentucky. Photo courtesy @GatorsSB Twitter.

Number-five Florida’s 12 hits in Sunday’s game against No. 20 Georgia may seem like a high number. That’s certainly true, but this is a Gators Softball team averaging just under eight hits per game. The difference was their ability to take chances. In turn, the Gators put up their biggest margin of victory in their history against Georgia, winning 17-1 in five innings.

Bouncing Back in a Big Way

One way to summarize Saturday’s series-opening loss to Georgia would be disappointment in the batter’s box. The Gators could not figure out Georgia starting pitcher Mary Wilson Avant. Avant diced up the Gators for six strikeouts.

Tim Walton’s Gators ensured Sunday afternoon provided a different storyline. However, not even he could have foreseen this offensive eruption.

Charla Echols set the pace for the game with her first-inning two-run homer. Echols’s sixth home run of the season would go on to be the difference maker in the contest, but she got insurance from her teammates.

Julia Cottrill made it back-to-back homers with Echols to put the Gators up 3-0 in the first inning. Before the Bulldogs got two outs in the first, the Gators managed more hits and more runs than they did in the previous game.

For the remainder of the game, the accolades are spread throughout the lineup.

Charla Echols and Cheyenne Lindsey each had five RBIs. Lindsey continued her hot run of form going three-for-four at the plate. Avery Goelz went two-for-two and picked up three RBIs.

Twelve hits is certainly impressive, but it only tells part of this game’s story.

Georgia’s pitching staff features one great pitcher, Avant, and a bullpen of good pitchers. However, these other pitchers struggled.

Florida earned a season-high 13 walks. For some reference, they average four walks per game.

Now, not all the runs these players account for directly led to runs, but it certainly puts pressure on the pitchers. Two of Georgia’s walks came when the Gators loaded the bases, leading to runs.

While the Gators flourished in the box, starting pitcher Natalie Lugo dealt in the circle.

In her tenth start of the season, Lugo improved her record on the season to 8-1 with her complete-game.

Lugo yielded only three hits to a Georgia team that managed five against Florida’s best pitcher this season. The only run put across the plate by Georgia came in the third inning. With the Gators leading 13-0, two two-out singles ended Lugo’s shutout.

Lugo struck out four Bulldogs en-route to her eighth win of the season.

As a team Florida now sits at 26-4 on the season. However, the series against Georgia is still up for grabs.

A rubber-match game three in the series is set for Monday night at 7 p.m.

Originally from Seminole in the Tampa Bay area, Kyle is a contributor for ESPN Gainesville as well as local NPR and PBS affiliate WUFT. Kyle wants to get into sports with a lofty dream of being a sports broadcaster. He was raised playing soccer and baseball while watching hockey and football, so the knowledge about various sports is fairly extensive.
@KyleFanslerUF
Previous Rays Take Opening Series; On to Boston
Next Gators Men’s Tennis Earn Regular Season SEC Title