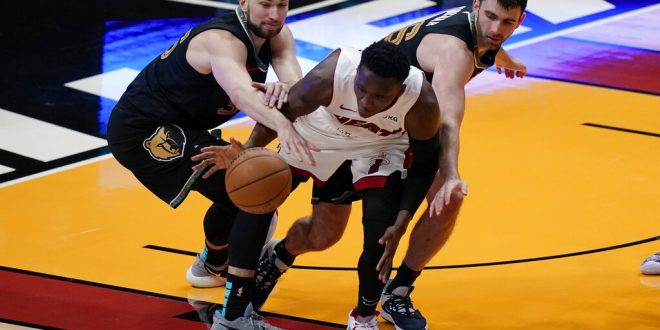 The Miami Heat have seen their fair share of ups and downs this season. At one point the Heat were one of the worst in the east, another time they were fourth.

How the season has played out

The Heat have been the definition of streaky this season. After starting the season going back and forth with wins and losses to get to 4-4, the team went 3-10. That streak of losses went until Feb. 3. From then until March 16, the Heat went 15-4, including a stretch of going 11-1. Then they lost six straight followed by four wins in a loss to get to where they are as of Wednesday, April 7.

Jimmy Butler and Bam Adebayo have lead the team this season. They are number one in the five major stat categories of points, rebounds, assists, steals, and blocks per game. Butler leads three, Adebayo leads two.

Miami is currently the six seed in the East.

The Heat had one of the last trades of the NBA Trade Deadline. As reported by Chase Anschultz for WRUF, they traded Kelly Olynyk and Avery Bradley to the Rockets for Victor Oladipo.

Since joining the team, Oladipo has had a slow start with averages of 10pts, 3.3reb, 4ast, 1.3stl on not great shooting. What makes things better, though, is his most recent game with the Heat was his best, scoring 16 points on 43% from the field. Having changed teams for the second time this season, it is to be expected for him to start slow.

As Oladipo said, though, he was brought to this team for his defense.

“He wants me to come in here and defend. And that’s exactly what I’m going to do.” – @VicOladipo on speaking with Pat Riley

As always, rumors are plentiful with the NBA and the Miami Heat.

They are signing free agent Dwayne Dedmon. The 31-year-old center has career averages of 6.4 points and six rebounds.

The Heat are also in rumors for superstar Kawhi Leonard. Able to hit free agency this offseason, Leonard is “intrigued” by the idea of signing to Miami.

Miami’s next game is against the Los Angeles Lakers on Thursday.

Jensen Young is a journalism student at the University of Florida. He works as a sports writer for WRUF.com and is the voice of trendings on Wednesday mornings on the WRUF radio station.
@Jensen_Young9
Previous Lightning Lose To Blue Jackets 4-2
Next Softball Set to Host Two Games Against USF in Midweek Matchup