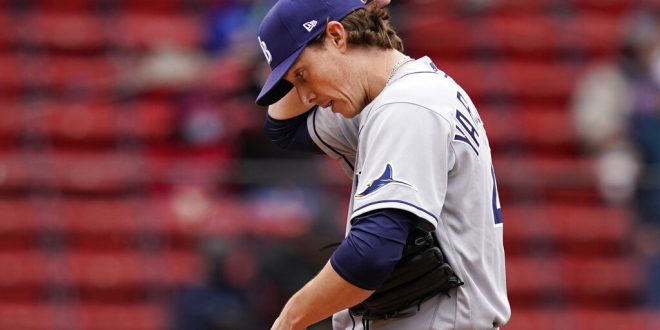 The question around the Tampa Bay Rays as they begin this season has been simple: can they replicate the magical run they made to the World Series in 2020?

Tampa Bay retained much of the offensive core from the 2020 American League champions. The starting rotation told a different story with the departures of Blake Snell via trade and Charlie Morton via free agency.

Rays management somewhat filled the void in starters by signing three veterans in Michael Wacha, Chris Archer, and Rich Hill. Still, an early downward trend for the Rays’ arms might have been exposed in Boston this week.

After taking care of business last week in Miami, the Rays were swept by a Red Sox team that missed the playoffs last year. Only one of the three games was truly close, and the Rays dropped that one in heartbreaking fashion. Here’s a look at how Tampa fared this past week.

An all-around struggle occurred for the Rays on Monday who were unable to get much of anything going until late. Fortunately for the Sox, they had a lot going for them.

Boston did not leave many runners stranded. They got on, got them over, and got them in all night long. That resulted in their season-high 11 runs.

In the 5th inning, the Red Sox blew it open on a Xander Bogaerts double. Catcher Mike Zunino tried to keep Bogaerts from another extra base, but made a costly throwing error that scored two.

Ball didn't leave the park but Xander still found a way to touch 'em all. pic.twitter.com/wUAEOMXgcK

Two more runs in the bottom of the 6th gave Boston a 7-0 lead that was never really challenged in the last three innings.

A long four and a half hours of baseball ended in sorrow for the Rays.

A two-RBI single from Manuel Margot in the top of the 3rd put Tampa up 2-1. They would add to their lead in the 6th on a single from Joey Wendle.

Tyler Glasnow was superb, striking out nine Boston batters in six innings of work. He earned the no decision thanks to the Sox’ late game heroics.

Boston scored one a piece in the 8th and 9th innings, sending the game to extras on a 383-foot bomb from Christian Vazquez. A scoreless 10th inning and a run for each team in the 11th set up an eventful final chapter.

Randy Arozarena brought in Zunino to make it 5-4 in the top of the 12th, but his defensive blunder in the bottom of the inning would seal the Rays’ fate.

With two on and two out, a do-or-die for the Red Sox ended favorably as Arozarena misread a J.D. Martinez fly ball to deep right that scored the walk-off and the victory for Boston.

J.D. CALLING IT A NIGHT!!!! pic.twitter.com/EJSnnxKan8

Tampa continued the slide in the final game of the series in a game that was marked by a rough outing from Ryan Yarbrough.

He struggled mightily (5.0 IP, 9 H, 6 ER), mainly in a difficult 5th inning. It started with a Martinez double that brought in Enrique Hernandez and Kevin Plawecki.

Another single from Vasquez brought in Martinez and Bogaerts, making the Sox lead 6-1. The effective final nail in the coffin was another costly error, this time on a throw from Willy Adames. Two more Sox runners scored, leaving the Rays an 8-1 deficit.

Tampa was again ineffective at the plate, going an abysmal 5-31 at the plate yesterday. Nathan Eovaldi was masterful for Boston (7 IP, 3 H, 1 ER, 7 K), making life even more difficult for the already slumping Rays batters.

Tampa Bay will look to put the past behind them in their first series at home starting Friday. They’ll have to shake off the sweep quickly to beat their next opponent: the New York Yankees. As the season progresses, the new-look Rays rotation will have to keep proving themselves to live up to lofty expectations set for them.

Caleb Wiegandt is a first-year Journalism student on the Sports and Media track in the University of Florida's College of Journalism and Communications. He has previous bylines in USA Today, Yahoo Finance, and The Louisville Courier-Journal before arriving at ESPN Gainesville. Caleb is a proud graduate of Holy Cross High School in southwest Louisville, Kentucky, where he was born and raised. You can reach Caleb at cwiegandt@ufl.edu.
@@CalebWiegandt
Previous Former Gator Jonathan India Continues Hot Start with Reds
Next Tedarrell Slaton Hopes For NFL Chance After Successful Pro Day