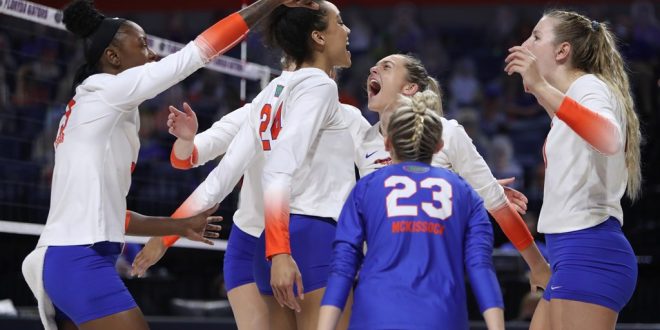 Scenes from the Gators' match against Kentucky. Photo by CourtneyCulbreath

Florida Volleyball is set to match up with Morehead State this afternoon in the second round of the 2020-21 NCAA Tournament. Morehead State defeated the Creighton Bluejays yesterday in the first round in five sets. The Gators marked at the No. 8 overall seed after a 19-3 season which rewarded them with a first-round bye. First-serve is slated for 3:30 p.m.

Morehead State is 17-1 overall and will face Florida volleyball for the first time in program history this afternoon. The Eagles grabbed their first win in an NCAA Tournament yesterday when they defeated the Bluejays with scores of 22-25, 25-23, 25-23, 14-25, 15-13. In addition, Florida finished their season with an overall record of 19-3 this season which placed them at second in the SEC. The Gators are looking to grab a win for a chance to see the semi-finals.

WHAT A HISTORIC WIN!

Heading into the match-up, the Eagles are bringing great offensive talent to the Gator’s defense. Hitter Olivia Lohmeier is averaging 4.32 kills per set and has accumulated 272 kills this season. Setter Bridget Bessier has been able to contribute to her offense by averaging 11.57 assists per set. On defense, libero Allison Whitten has collected 282 digs for her team this season.

On the Gators offense, hitter T’ara Ceasar sits in her team’s leader spot where she averages 3.92 kills per set and has collected 298 this season. Thayer Hall is not far behind where she averages 3.42 kills per set with 261 overall. Setter Marlie Monserez carries her offense with 753 assists this season. On defense, libero Elli McKissock has successfully defended 280 kills.

You can listen live to the Gatros’ matchup with Morehead State on ESPN Gainesville 98.1 FM/850 WRUF or watch live on ESPN3.

Parker Welch is a Junior at the University of Florida majoring in Sports Media at the College of Journalism & Communications.
@parkerrwelch
Previous Astros Place Five Players on Injured List Due to COVID19
Next White Sox’ Rodon Throws No-Hitter Against Cleveland Indians