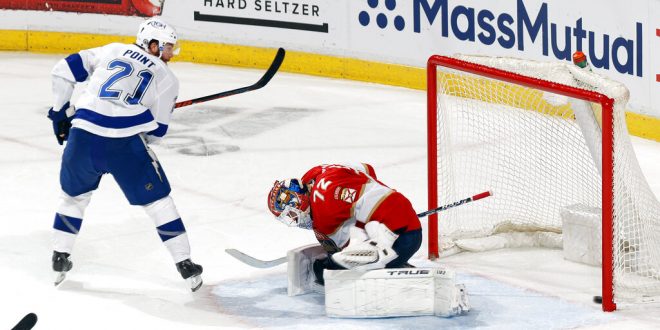 Lightning, Panthers Gear Up for Game 2 of Playoff Series

The Tampa Bay Lightning and Florida Panthers face off in Game 2 of their Stanley Cup Playoff series Tuesday night. The Lightning lead the series 1-0 after a last minute, third period goal from center Brayden Point who gave the Bolts a 5-4 victory.

Brayden Point comes up with another big goal and the @TBLightning take Game 1! #StanleyCup pic.twitter.com/bdRN1NwGwa

Kucherov Back with Bolts

One of the top storylines for the Lightning is the return of Nikita Kucherov. The right-wing spent the majority of the regular season recovering from a hip surgery he underwent at the conclusion of last season. In the Bolts’ Stanley Cup championship season, Kucherov lead the team in goals (33), assists (52), and points (85).

However, he hit the ice just in time for this year’s playoffs. Tampa Bay immediately felt the impact of Kucherov back on the ice in Game 1; he recorded two goals an assist.

Lightning head coach Jon Cooper had this to say on Kucherov’s return:

In the absence of Kucherov, Point and Victor Hedman have been steady for the Bolts’ offense. Point scored two third-period goals in Game 1 to give Tampa Bay series lead. In the regular season, Point cemented his role as the Lightning’s leading scorer with 23 goals and 48 points.

The Panthers have the home ice advantage in their Game 2 matchup.

Florida is switching things up at the net, goalie Chris Driedger will get the start. In Game 1 goalie Sergei Bobrovsky took to the net. Driedger has started 23 games for the Panthers with an overall record of 14-6 with three overtime losses. In his second season with the Panthers, he holds a .927 save percentage.

Per Coach Q, it’ll be Chris Driedger in net tonight for Game 2. #FLAvsTBL

On the attack, the Panthers look to be good hands after having four different scorers in Game 1. Leftwing Jonathan Huberdeau and center Aleksander Barkov lead the offense.

However, the Panthers will be without Sam Bennett due his one game suspension for boarding in Game 1. Bennett recorded two assists in Game 1.