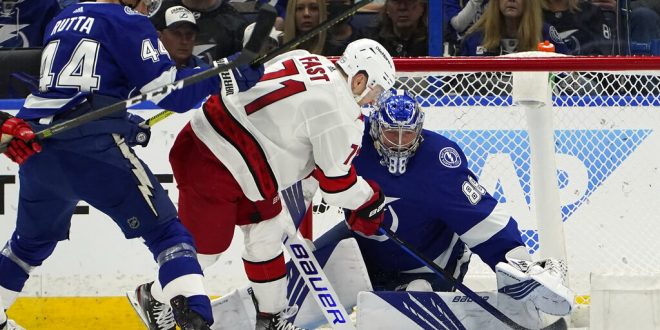 The Lightning enter Game 5 with a chance to advance to the Stanley Cup semifinals for the second-straight year.

The momentum slightly shifted in favor of the Hurricanes in Game 3 with an overtime victory. A Jordan Staal powerplay goal put the Hurricanes back in the series.

Game 4 featured one of the most exciting periods of the 2021 Stanley Cup Playoffs. The second period featured an offensive battle that totaled eight combined goals. The Lightning led 5-4 heading into the third period. However, Tampa Bay sealed the deal with a goal from Nikita Kucherov to put them up 6-4.

A look back at how the Bolts took a 3-1 series lead over the 'Canes!

The Tampa Bay offense is looking sharp. Kucherov leads the team, and league, in playoff points (17). Lightning captain Steven Stamkos comes in not fair behind with a total of 13 points in the postseason.

However, the depth of the Lightning attack extends beyond their captains. Brayden Point and Alex Killorn have been major factors for the Lightning offense combing for 13 postseason goals.

The true depth of the offense was tested in Game 4. The Lightning have proven they can win the offensive battle against talented teams like the Hurricanes. Tampa Bay faced a similar test against the Florida Panthers, another stellar offensive team, in their playoff series.

The Hurricanes’ offense has been largely carried by Sebastian Aho who leads the team in points (11) and goals (6). However, the Hurricanes are not lacking in the offensive department.

Carolina proved they have depth beyond Aho, with four different scorers recording goals in Game 4. In the first two games, Jordan Staal and Brett Pesce proved to be reliable scorers for the Hurricanes.

The Hurricanes have gone toe-to-toe with the Lightning, falling in the last period. However, if they can tap into their roster and win the offensive battle late in the game, the Hurricanes may be able to get back into the series.