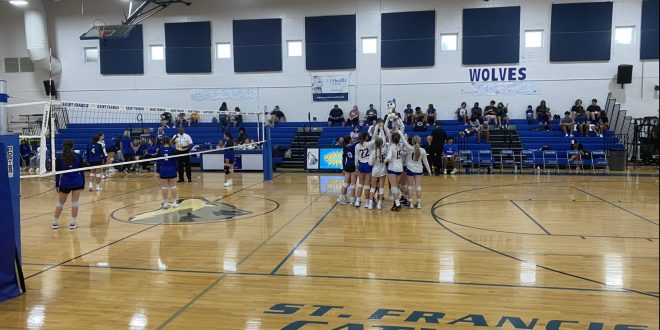 In a down-the-road showdown rematch on Thursday evening, the Saint Francis Catholic Wolves (4-6) lost to the Countryside Christian Minutemen (10-0) in four sets in women’s volleyball.  These teams met up earlier in the season and the Wolves suffered a 3-1 loss.

Right off the bat, both teams fought neck and neck trying to take the lead. As one team gained a point, so did the other one. However, the Minutemen pulled ahead with a block from sophomore right-side hitter Alison Scarborough making the score 13-10. Saint Francis dropped a lot of balls due to miscommunication helping the Minutemen rack up the points.

The Wolves tried to fight tooth and nail to make up for their errors, but in the end, Countryside Christian won the first set 25-19.

Coming back to start the second set, it seemed like the Wolves talked out their issues and started to make better plays.

Once the Wolves snatched the lead, they held on for as long as they could. Just when the Wolves thought they could runway with the lead, the Minutemen server put on the pressure making it hard for Saint Francis to make proper plays. Countryside Christian won the second set 25-20.

Before the start of the third set, the Countryside Christian fans chanted “CCS!” “CCS!” over and over as one fan led the crowd with the chant he held up what looked like a taxidermy mountain lion holding blue and white pom poms.

This chant lit a fire in the Wolves and they came back into this set showing the Minutemen they are not to be messed with while in the Wolfden. They were able to take the lead early on.

At every single point, the student section and bench were in an uproar. The Wolfden felt like it flipped upside down during this set. It went from only hearing the players’ feet scuff and coaches yelling plays to barely even hearing the person next to you because of all the cheering.

Throughout the game, junior Alaysia Faircloth played an influential role on the Wolves’ team. Whenever they needed someone to block, she quickly jumped up and was there to deny a Minutemen kill. Passing Errors and Net Violations helped both teams add to their scores and kept the competition close. The Wolves came out of this set victorious winning 25-21.

The Wolves celebrate winning their first set of the match, 25-21. The Minutemen still lead the matchup 2-1. @ESPNGainesville @GNVpreps pic.twitter.com/cb7w69ubEu

A Tough Loss in the Final Set

You could cut the tension in the gymnasium with a knife. Even though the Minutemen were leading in sets 2-1, the Wolves and their fans were on fire. The student section came up with cheers and chants to help the Wolves keep their heads in the game and hopefully pull out a win for Saint Francis.

The Minutemen did not take the loss of the third set too lightly. They came out of the break and slammed balls down the court left and right making it hard for the Wolves to keep up. A key player for the Minutemen was outside hitter Hallie Robertson. With help from her setter, she made a kill that made the crowd quake.

Going into a timeout, the score was 22-13 and the Minutemen fans started their “CCS” cheer up again and this time the team joined in. Saint Francis tried to make up for the trailing behind with a few blocks and minor errors made by Countryside Christian but in the end, the Minutemen won the set, 25-17, and the match, 3-1.