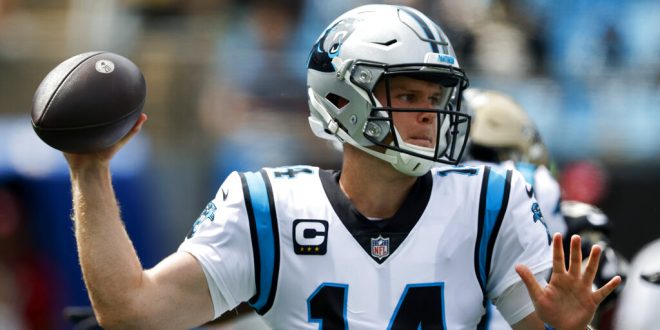 The Carolina Panthers visit the Houston Texans for a Thursday Night Football matchup.

The Panthers will attempt to stay undefeated, while the Texans try to bounce back from their loss to Cleveland last week.

The Panthers’ defense was stifling in the teams 26-7 win over the New Orleans Saints last week.  The unit held the Saints’ offense to just 128 yards, an improvement from the 252 yards given up to the New York Jets in week one.

Carolina has been able to stop the run early this season holding opponents to an average of 46.5 yards. The team leads the league in sacks (10) and yards allowed per game (190).

Holding the Saints to a touchdown is impressive considering New Orleans torched Green Bay for 38 points in week one. Jameis Winston threw five touchdowns in that game. Those touchdowns were exchanged for two interceptions against Carolina. Winston did scramble for a score but was sacked four times.

The defense has been on point, but the offense has performed as well.

Sam Darnold has thrown three touchdowns and one interception in his first two games in Carolina. He is completing over 65 percent of his passes for a total of 584 yards. Darnold also has a rushing touchdown this season. This is the first time that he has started the season 2-0.

Running back Christian McCaffrey is proving once again to be a do-it-all back. McCaffrey has rushed for 170 yards and a touchdown, while also catching 14 passes for 154 yards this season. He is the second leading receiver on the team behind D.J. Moore, who caught a touchdown last week.

While the team has yet to lose, head coach Matt Rhule is not satisfied.

Rhule said the team has a lot of tings left to improve. For starters, the kicking game needs work.

The Houston Texans lost more than their game with the Cleveland Browns last week. Starting quarterback Tyrod Taylor suffered a hamstring injury that kept him on the sidelines for the second half of the game. Taylor’s injury is believed to have occurred on his touchdown scramble in the second quarter.

Rookie Davis Mills would step in at quarterback.

He completed 44 percent of his passes for 102 yards, a touchdown and an interception. His first career touchdown came with just over 11 minutes remaining in the game.

Mills will get his first career start in the NFL on Thursday. Head coach David Culley is confident in Mills’ ability.