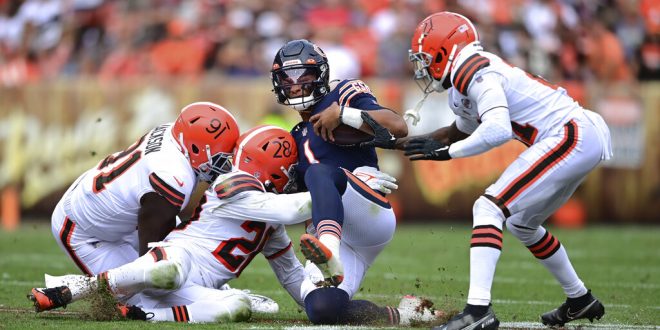 Chicago Bears quarterback Justin Fields got sacked more times than he completed a pass in his first start, a 26-6 loss to the Cleveland Browns.

The former Ohio State quarterback started the season as the backup but got the start on Sunday due to an Andy Dalton knee injury.

Dalton–an 11-year veteran in his first year in Chicago–could miss one to two more weeks with the knee injury, according to ESPN’s Adam Schefter. Head coach Matt Nagy said last week that Dalton would remain the starter when healthy.

The Bears used the 11th overall pick on Fields in this year’s Draft and he impressed in the preseason. Things quickly went south in his first start as the Browns sacked Fields nine times and he completed just six passes.

Fields threw for 68 yards on 28 attempts–an average of 3.4 yards per attempt. The nine sacks resulted in a total loss of 67 yards.

Fields suffered a hand injury late in the fourth quarter that has his status for next Sunday up in the air.

Fields Is Not Alone

It has been a struggle out of the gates for all of the rookie quarterbacks from the 2021 Draft class. Four of the quarterbacks taken in the first round–Zach Wilson of the Jets, Mac Jones of the Patriots, Trevor Lawrence of the Jaguars, and Justin Fields of the Bears–have combined for just one win in nine starts.

No rookie quarterback has won their first start this year and shared a combined 1-9 record. That game was a win over Wilson’s Jets in which Wilson threw five interceptions. In total, Jones has three interceptions compared to just two touchdowns in his first three starts.

Lawrence, the number one overall pick, has thrown seven interceptions in his three starts and just five touchdowns. So far he is completing just 54.2% of his passes and averaging 5.7 yards per attempt.

Nagy said in his press conference Monday that he could not definitively name a starter for next week. The uncertainty about Fields’s hand and Dalton’s knee leaves the quarterbacking situation up in the air heading into Week Four.

Nagy stated that Dalton is “week-to-week” while dealing with the injury. He said all three quarterbacks–including last year’s starter, Nick Foles–could be in contention to start on Sunday. If Foles has to start, it means the Bears will have three starters in their first four games this season. 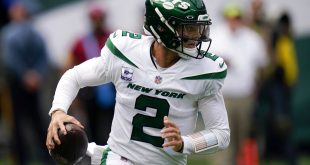