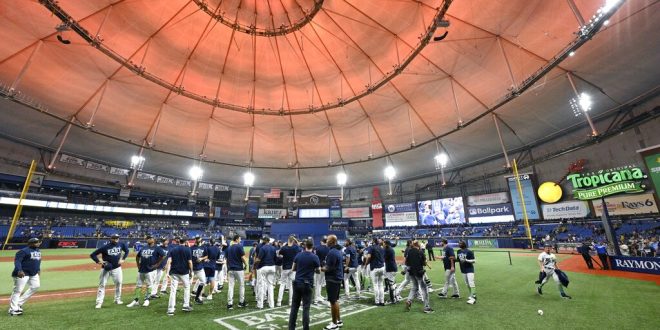 All is well in Tampa Bay. The Buccaneers are 2-1, coming off a Super Bowl victory. The Lightning start preseason, defending their second straight Stanley Cup. And the Rays have a stronghold on the AL East, hoping to make it back to the World Series after falling to the Dodgers last season. With Tampa fans riding high on victory, it would take a poorly timed advertisement at Tropicana Field to bring morale down.

Rays to advertise Montreal plan with sign at the Trop during postseason https://t.co/wO2iYYMW7p pic.twitter.com/0uE5UlFD7o

Poorly timed, indeed, as Rays President Matt Silverman announced the team will be “more visible and vocal” on its plan to split home games between Tampa and Montreal. Even further, Silverman said on the “This Week in Rays Baseball” pregame show the team will begin advertising its plans during the 2021 postseason, with a sign in the right field foul territory at ‘The Trop’. Likewise, the advertisement will display the plan’s logo, sporting both Tampa and Montreal.

The controversial move has met the ire of the fanbase, with the news releasing shortly after the Rays clinched their second straight AL East crown.

So are the Rays tone deaf? Or just dumb? Because those are the best-case scenarios after the team bungled the clinching of the AL East title by shining the spotlight on their proposed sister city plan with Montreal, @romano_tbtimes writes.https://t.co/IB2agYgyr7

The Rays first announced the split-game plan in June 2019. Essentially, the plan is the MLB’s first ever “sister-city” initiative, with the Rays planning to split home games between Tampa and Montreal. Years ago, Montreal had its own MLB franchise, the Expos, which relocated to Washington in 2005.

Chiefly, the initiative revolves around two new ball parks in the host cities. Notably, the parks are set to be open-air ball parks, a far cry from the iconic dome covering Tropicana Field. The Rays have been flirting with a new ball park for a few years now. Since the teams inception in 1990, Tropicana Field has been the home of the Rays.

Initially, this plan felt skepticism from spectators. Skeptics question how government officials from each location would allow such a plan. Also, the way both fan bases would reacts was another area of concern. However, Silverman ensures this plan is being well-developed and they are making progress.

I literally can’t think of anything more disrespectful to the fans and the ⁦@RaysBaseball players than this! Disgusting on every level! ⁦@MLB⁩ must #DumpStu

Rays will tout Montreal plan during postseason with sign

For now, the Rays will remain in Tampa with hopes of returning to the Fall Classic in the 2021 postseason. Yet, every time a ball flies to right field, fans will have to be reminded of the move to Montreal none of them asked for.

Sam Petosa is a Journalism major pursuing a Specialization in Sports and Media at UF. The South Florida native produces daily shows for WRUF, including "Sport Scene with Steve Russell, and "The Tailgate." In addition, Sam provides weekly sports updates for WUFT News and radio Sportscenter's for WRUF radio. Sam has been a writer at ESPN Gainesville since January 2020.
@sampetosa5
Previous Gators AD Stricklin reacts to Newbauer allegations in Published Story
Next Cowboys Roll, Rout Eagles 41-21