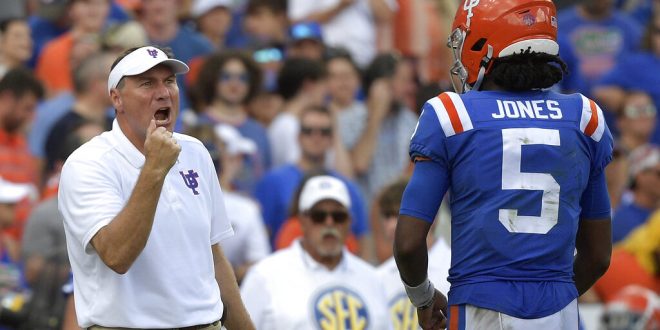 Gators Head Coach Dan Mullen spoke to the media Monday ahead of Florida’s trip to Baton Rouge. Mullen touched on the status of key players as well as the rivalry with the LSU Tigers.

Mullen opened the press conference by noting how difficult it is to play at Tiger Stadium.

“Tiger Stadium is always a tough place to play,” Mullen said. “They got a great crowd and a talented football team.”

When asked about LSU quarterback Max Johnson, Mullen said he does a good job extending plays.

Mullen said the 6-foot-5 quarterback may not look like a mobile quarterback but said he does a great job getting outside the pocket and making players miss.

When it comes to the history of the matchup, the Gators lead the series with a 33-31-3 record against the Tigers. The Gators have lost six of the last eight games to LSU. Florida’s last win at Tiger Stadium came in 2016.

Preseason All-American Kaiir Elam has been sidelined since the Gators’ Week Four matchup with Tennesee. Mullen said the projected top-10 pick should be able to return for the Gators against LSU.

After reports that cornerback Elijah Blades was no longer with the team, Mullen told the media that he met with Blades and dismissed him from the team.

Blades, a transfer from Texas A&M, has since entered the transfer portal.

Blades came to Florida from Texas A&M this offseason.https://t.co/d12yxXkOGy

The Question Kicking at Everyone

One of the biggest topics of discussion following the Gators’ 42-0 win over Vanderbilt and during Monday’s press conference was punter Jeremy Crawshaw.

On Saturday, Crawshaw converted a fourth down with a fake punt and run down the field.

“They have a great kicking academy in Australia,” Mullen said. “We watched all the film and we ended up with Jeremy Crawshaw.”

The Gators will take on the LSU Tigers Saturday at noon. The Gators open up the week as 10-point favorites with LSU standout cornerback Derek Stingley Jr. and wide receiver Kayshon Boutte out for the game.

Chris Will is a second-year journalism student with a focus in sports and media. Originally from the Fort Lauderdale area, Will is now the beat reporter for Florida Gymnastics and covers all things sports in Gainesville.
@_Chris_Will_
Previous Rays Face Elimination in ALDS Game Four
Next Ravens Make Comeback To Defeat Colts In OT