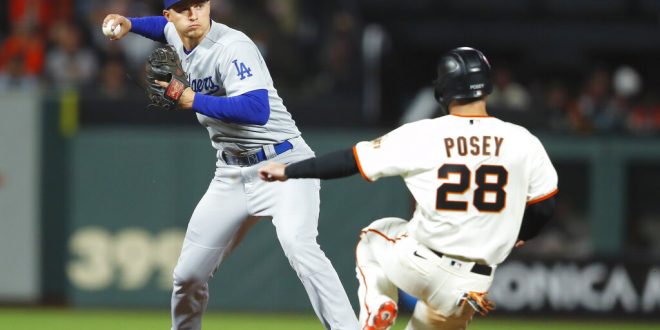 With a 1-0 win over the Dodgers last night, the Giants have a chance to advance with a win in game four tonight. Especially with this being the first ever postseason meeting between the teams, clinching the series in Los Angeles against their biggest rival would no doubt be a huge achievement.

The first two games of the series were played in San Francisco. The Giants took game one, 4-0, with Logan Webb‘s gem of a start. The Dodgers bounced back in game two by a 9-2 score. With the series moving to Los Angeles, the Giants won game three.

With both teams having won over 100 games this season, both teams are stacked on all aspects of the team. Pitching has been dominant so far. The Giants’ shutouts in games one and three are proving huge. The Dodgers scored the fourth most runs in baseball this season, so the Giants’ pitching staff has had no easy task. The last time the Dodgers were shut out was on Aug. 29 against the Rockies. The Dodgers have also only been shut out five times all year, and this was the first time they were shut out twice in a three-game span.

For the Giants, being where they are now is well above the expectations they were given in the preseason. They started the season projected to win 75 games. Now, they are one win away from the NLCS.

The Giants have announced the 31-year-old right-hander and former Gator Anthony DeSclafani as their starting pitcher for tonight and will make his postseason debut. DeSclafani posted 13-7 record and a 3.17 ERA in the regular season. However, DeSclafani has not done well against the Dodgers this season. In his six starts against the Dodgers, he has allowed 22 runs in 27 innings pitched.

The Dodgers have not yet announced their starting pitcher. Julio Urias and Max Scherzer are unavailable after pitching in games two and three respectively. The Dodgers have Tony Gonsolin available as well as Walker Buehler, who pitched in game one and is on three days of rest. The Dodgers also have the 36-year-old lefty David Price who has started and worked out of the bullpen this year. He has not pitched this postseason and is available to potentially start in game four.

The lineups have not yet been announced for either team. The Giants’ most productive bats so far have been Buster Posey and Kris Bryant. Posey is 5 for 12 in the series with a two-run home run off Walker Buehler in game one. Kris Bryant is 4 for 10 in the series and hit a solo home run in game one, also off Buehler. Evan Longoria also homered for the Giants, which proved vital as it was the only run scored in game three.

The Dodgers’ bats have been cold, then hot, then cold again. They were shutout in games one and three, yet they scored nine runs in game two. Former MVP Mookie Betts is 5 for 16, and drove in a run in game two. Chris Taylor has been the under-the-radar hero for the Dodgers, scoring three runs in game two and of course the walk off home run in the wild card game.

Tonight’s game starts at 9:07 p.m. ET in Dodger Stadium in Los Angeles. Live coverage will be aired on ESPN radio.