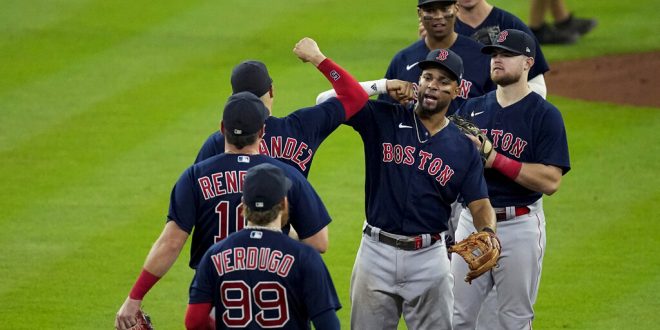 A dead-locked ALCS heads to Boston for Game 3 with both teams seeking to find an advantage.

The Red Sox are red hot, having won eight of their last ten dating back to the regular season.

They avoided falling behind 2-0 in the series with an offensive explosion in a 9-5 win over the Astros in Game 2.

The Astros came from behind in Game 1 thanks to heroics from stars Jose Altuve and Carlos Correa.

Now the Red Sox take over home field in advantage in a raucous Fenway Park that has become an intimidating place to play. Houston will need to find away to emerge from three games in Boston with an upper hand in the series.

The star of the Postseason so far has been Red Sox center fielder Kiké Hernández. The do-everything man is hitting .500 in the Postseason with five home runs and just four strikeouts.

He also played incredible defense in center, despite his natural position being in the infield.

THIS MAN IS DOING IT ALL!

Kiké Hernández with a HUGE catch to keep multiple Astros runs off the board! pic.twitter.com/0XvKTzFb1u

Once a utility man with the Los Angeles Dodgers, Hernández has emerged as a star in October and is carrying the Red Sox so far. In the ALCS alone, he is 6-9 with three home runs.

He has multiple hits in four of the Red Sox seven games so far, and has gone hitless in just one of them.

Hernández has actually been better against same-sided pitching in the Postseason, going 13-24 with four of his five home runs against righties. That is bad news for the Astros as they have right-hander Jose Urquidy on the mound in Game 3. They are also likely without their best righty, Lance McCullers, for the ALCS with a forearm injury.

If the Astros are unable to slow down Hernández, they could be in major danger of getting upset in the ALCS.

Game 3 in an even series is always crucial as it always presents chance for a team to take control.

In this installment of the ALCS, it seems that pitching will be the deciding factors. Both teams have been nearly unstoppable all Postseason on the offensive side of the ball,  no surprise considering they were two of the best offenses in the league all year. The Astros ranked first in wRC+ with 112 while the Red Sox ranked sixth with 107, per Fangraphs.

The two teams currently lead all Postseason teams in OPS. The Red Sox on a different level than any other team with a .925 team OPS in October so far. The Astros are second at .806. For reference, the Blue Jays led the MLB in OPS as a team in the regular season at .797.

Both teams have struggled on the mound, however. Houston is currently posting a 5.09 ERA as a team and Boston’s team ERA in the Postseason is 4.43.

The Red Sox will send struggling starter Eduardo Rodriguez to the mound in Game 3. Rodriguez has allowed four runs on five hits and two walks in just 6 2/3 innings of work in the Postseason so far. He made it through just 1 2/3 innings in his first start before being pulled with 41 pitches, allowing two runs on two hits and two walks while striking out just one batter.

News: Eduardo Rodriguez starts Game 3, Alex Cora says, while Nick Pivetta will be available in relief. No decision yet on Game 4 but Pivetta is the likely choice if he’s not needed in relief tomorrow. @MLBNetwork @MLB

Meanwhile, Houston’s starter, Jose Urquidy, has yet to throw a pitch in October. Astros ace Lance McCullers was the presumptive option on Monday, but they have lost him for the ALCS to an injury.

Urquidy faces a massive challenge to shut down a scorching Red Sox offense in his first start of the Postseason.

Whichever team can find a good pitching performance will likely gain the upper hand in this series. If both teams continue to struggle on the mound, the challenge will only grow for both.

First pitch of ALCS Game 3 is scheduled for tonight at 8:08 p.m.