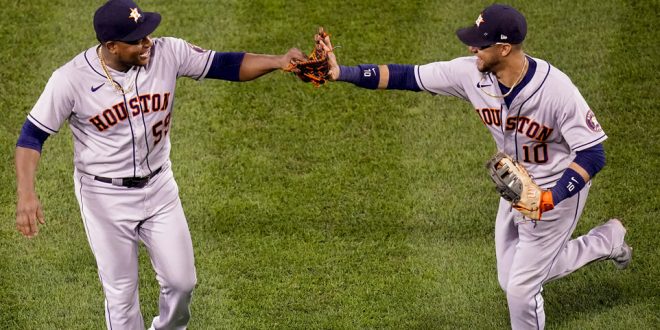 The Houston Astros won 9-1 over the Boston Red Sox in Game 5 of the ALCS Wednesday night. The Astros led a five-run sixth inning to victory, and with a 3-2 lead in the series, they’re now only one win away from the World Series.

Framber Valdez pitched a gem for Houston, going eight innings and allowing only one earned run with five strikeouts. Chris Sale took the loss after leaving in the sixth inning with two earned runs. Yordan Alvarez led the way for the Astros offensively, going three-for-five with a home run and three RBI.

Valdez shone in his third start of the postseason, giving Houston ample room to win their second consecutive game in Fenway Park. In his first two starts of the playoffs, Framber pitched a combined seven innings and gave up 13 hits. So, his eight-inning, three-hit performance on Wednesday night was certainly a step up.

The key for Valdez in Game 5 was his sinker. The Astros starter began the game by throwing 12 straight sinkers and retiring the side in order in the first inning. In fact, Valdez had a perfect game going through his first four innings. The Red Sox had trouble elevating the ball all night, as Valdez chalked up 15 of his 24 outs on groundballs.

To stifle a team like the Red Sox is rare, especially in October and specifically in this year’s postseason. Of the 52 starts this postseason, pitchers are averaging only four innings per outing. Valdez kept his pitch count to 93, as well, which made Astros manager Dusty Baker’s decision to keep him in an easy one.

Going into the sixth inning, this game had the feel of a pitcher’s duel, with Houston leading 1-0. After struggling in his first two starts of the postseason, Chris Sale had it going for the Red Sox through five in Game 5. The Astros had men on first and third with one out in the fourth inning before Sale struck out Carlos Correa and Kyle Tucker to get out of the jam, so he looked to have finally found his groove this October.

Then, in the bottom of the fifth, Hunter Renfroe had a chance with two men on and no outs. But, as is his specialty, Valdez forced a 6-4-3 double play to get two outs and eventually strand Devers at third. Then, the sixth inning struck.

Jose Altuve led off the top of the sixth with a walk, and a fielding error put Michael Brantley on with no outs. With one out and runners on second and third, Alvarez laced a double into left field, scoring both. An RBI double from Yuli Guriel and a two-RBI blooper from Jose Siri blew the game wide open. The Astros led 6-0 after the sixth inning and never looked back.

He has driven in all 3 for the @Astros! pic.twitter.com/1DOuJIA8SG

A solo home run from Devers accounted for the Red Sox lone run. But Valdez and Alvarez stole the show in Fenway to put the Astros within one game of the World Series.

On Tuesday, the Red Sox lost their first playoff game in Fenway since the 2018 ALCS. Before Wednesday, they had never lost back-to-back playoff games under Alex Cora. So, they’re not in the best spot as the series moves back to Houston. Baker acknowledged Houston’s advantage in the series but said they still need to ensure that fourth win.

The Astros will host the Red Sox in Minute Maid Park on Friday with two chances to win the pennant. The Red Sox have named Nathan Eovaldi as their starter, while the Astros have yet to announce one.

I'm a third-year student at the University of Florida passionate about storytelling and sportswriting. My goal is to work in communications for a professional sports team after I graduate.
Previous Magic Fall to Spurs in Season Opener
Next High Expectations surround Miami Heat