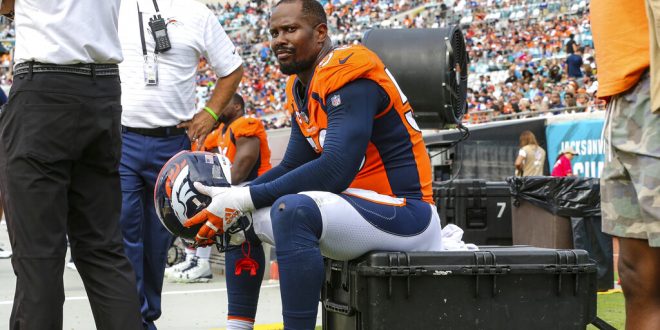 FILE - Denver Broncos outside linebacker Von Miller (58) on the sideline during the second half of an NFL football game against the Jacksonville Jaguars, Sunday, Sept. 19, 2021, in Jacksonville, Fla. A person with knowledge of the deal tells The Associated Press, Monday, Nov. 1, 2021, that the Denver Broncos are trading star linebacker Von Miller, the franchise's career sacks leader and Super Bowl 50 MVP, to the Los Angeles Rams for two 2022 draft picks.(AP Photo/Gary McCullough, File)

The trade deadline for the NFL is Tuesday at 4 p.m. and the Los Angeles Rams just made a power move before it’s too late. On Monday, the Denver Broncos agreed to trade eight-time Pro Bowl linebacker Von Miller to the Los Angeles Rams. In return, the Broncos will get a second and third-round pick from the Rams in the 2022 NFL draft. The Broncos will also pay Miller $9 million of his remaining 9.7 million dollar base pay for the remainder of the season.

Prior to the trade, Miller spent all 11 of his NFL seasons with the Broncos. He was named to first-team All-Pro three times and was Super Bowl MVP when the Broncos won Super Bowl 50. With the legacy he created with the team, Miller admits he was overcome by emotions when leaving Denver.

Miller also admits that he wasn’t expecting a trade. He expressed how much he cares about the Broncos and how tough the move is for him. “This is all I know,” Miller said with a shaky voice. He added that he’ll never forget his teammates, coaches, and memories with the Broncos.

Although Miller’s emotions are still running high, his roll with the Ram’s will be vital. He has been playing well this season, collecting 4.5 sacks and nine quarterback hits so far.
In LA, Miller will be accompanied by three-time NFL Defensive Player of the Year Aaron Donald and All-Pro cornerback Jalen Ramsey. With Donald, Ramsey, and linebacker Leonard Floyd, Miller knows the Ram’s have a strong defense and looks forward to joining them.

Von Miller is expected to debut with the Rams in Week 9 against the Tennessee Titans. The Rams are 7-1 this season, good for second in the NFC West. As the Rams continue to improve their roster, they are amongst the favorites to win Super Bowl LVI. 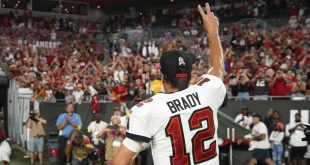 The Buccaneers Get Revenge on the Rams

The Tampa Bay Buccaneers beat the Los Angeles Rams on Sunday. First Half This game …