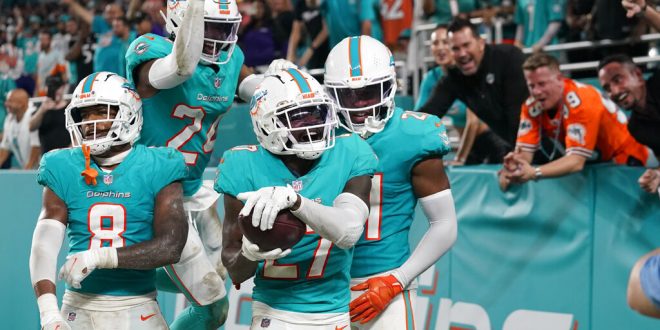 In a stunner, the Miami Dolphins upset the Baltimore Ravens on Thursday Night Football. The Dolphins gained control right before halftime and never looked back. The final score was 22-10 with Miami holding the lead for the entire second half.

The game got off to a slow start as only nine points were scored in the first half. With the teams putting up three field goals, a missed field goal and eight punts, they both needed to get going in the second half. However, only the Dolphins were able to accomplish this.

With quarterback Tua Tagovailoa still recovering from a broken finger, Jacoby Brissett got the nod as the starter. However, Brissett was taken out of the game going into the third quarter with a knee injury. He was cleared to play, but coach Brian Flores chose to play Tagovailoa instead.

Injury Update | Jacoby Brissett has a knee injury and is questionable to return.

With Tagovailoa at the helm, the third quarter was even quieter than the first 30 minutes of play, but the fourth quarter saw plenty of action. Miami was the team that showed up when it mattered most. They put up 16 points compared to Baltimore’s seven in the period.

In just over a minute of game time, Miami was able to come up with 10 points. Immediately following a field goal at the beginning of the fourth quarter, star cornerback Xavien Howard made debatably the play of the night. He stripped the ball from Sammy Watkins and brought it to the house to put them up 15-3.

The Ravens were able to bring the game back within reach when quarterback Lamar Jackson led the team down the field for a 99-yard touchdown drive. He hit Mark Andrews for a touchdown with just over four minutes left in the game.

Miami wasted no time and responded with a touchdown of their own. Tagovailoa kept the ball on a quarterback sneak to extend the lead back to two scores.

The Ravens’ comeback attempt came to a halt when Dolphins’ cornerback Justin Coleman picked off Jackson’s pass in the endzone.

Keys to the Miami Victory

When Brissett left the game, the injured Tagovailoa had a lot of pressure on him to come in and perform well. While he wasn’t perfect, he got the job done. His 158 passing yards and quarterback sneak touchdown were a big reason Miami was able to pull off the upset.

While he deserves a lot of recognition, so do his offensive weapons. The Dolphins were able to take advantage of the Ravens defensive mistakes resulting in numerous big plays. Their receivers had five plays go for more than 20 yards including 64-yard, 52-yard and 35-yard plays on three separate scoring drives.

The Dolphins’ offense played well when it needed to but the defense was stifling all night long. In specific, the safeties were asked to do everything, and they delivered.

Safeties Jevon Holland and Brandon Jones were utilized heavily in the box and at safety, but they even got snaps in the slot and at cornerback. Holland had one of the best games of his young career finishing with five tackles, a sack, two passes defended and four quarterback pressures.

Dolphins safeties Jevon Holland (21) and Brandon Jones (17) blitzed more times tonight against the Ravens than any other defensive back in any game this season.

The 3-7 Dolphins will be rewarded with a longer rest than usual coming off of their Thursday Night Victory. Their next game is at 1 p.m. on Nov. 21 against the New York Jets. The extra time could be useful giving Tagovailoa more time to heal before the next game.

They also have two receivers out for now but they’re hoping Will Fuller V can return against the Jets. Fuller will be eligible to return from injured reserve for the game, while DeVante Parker may still have a few weeks until he can return.

Previous Florida Volleyball Travels To Arkansas To Face Razorbacks
Next Mississippi State vs No. 17 Auburn – Preview