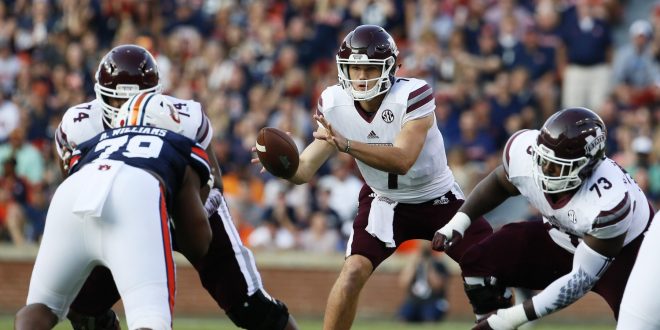 Mississippi State vs No. 17 Auburn – Preview

One of the big matchups out of the SEC West this week takes place on the plains of Auburn. Mississippi State looks to earn bowl eligibility with a win, while Auburn is playing to keep its hopes of winning the SEC West alive.

Tomorrow’s game marks the 95th meeting all-time between the two schools. The series dates all the way back to 1905, where Auburn won 18-0. Mississippi State has seen periods of success during the series, most notably in the 40s and late 90s. But all-time the series has been controlled by Auburn. The Tigers hold a 65-27-2 lead in the series, and have led the series ever since the first game.

The series has been a competitive one as of late. During the 2010s, Auburn led 6-4 during the decade, and they won last year’s meeting. A win for Auburn makes it three in a row over the Bulldogs, while a win for Mississippi State gets them their first win at Jordan-Hare since 2015.

Year two under Mike Leach is already a step up from 2020. A 4-7 season in year one left a lot of room for growth. Despite dropping a game to Memphis and a home game to LSU early in the season, the Bulldogs have been playing good football as of late. Mississippi State has already picked up a pair of ranked wins against Texas A&M and Kentucky. The Auburn game present a chance for a third.

Looking ahead, after this week they have a game against Tennessee State and the annual matchup with Ole Miss in the Egg Bowl. With the Bulldogs already sitting on five wins, getting to six and a trip to a bowl game looks very likely. Still, much is to be decided for Mississippi State. The game against Tennessee State should be a win, but including a bowl game, all of their other games they have a legitimate shot both to win and to lose. They could be finishing anywhere from 6-7 to 10-3, two very different season outcomes.

Bryan Harsin’s first year at Auburn has been solid. The Tigers hold a 6-3 record, with a pair of ranked wins over Arkansas and Ole Miss, as well as a road win over LSU. Even though three losses is not what a fan dreams of seeing during the season, Auburn’s three have all come against tough opposition. They lost on the road to Penn State in week three, at home to Georgia, and on the road to Texas A&M, all of whom were ranked losses.

Still, with only two SEC losses and everyone else in the West with at least one, Auburn still has a chance to win the SEC West and face Georgia in the SEC Championship. For Auburn, they must win out, including the Iron Bowl against Alabama. Normally that sounds like a tall order to fill, and it still is. But it is important to remember Auburn has beaten Alabama back-to-back times at home, and it is a home game for Auburn this year. Auburn would also need Texas A&M to lose one more, as they hold the tie-breaker over Auburn. The Aggies play Ole Miss this week and LSU to end the season, both on the road. So, the door is open for Auburn.

The main issue the Bulldogs face now is with their kicking game. Combined, Mississippi State kickers are nine-for-17 on field goals this season, including missing all three attempts against Arkansas. The situation is so dire, head coach Mike Leach announced they are holding an open tryout for a walk-on kicker. Leach described the situation as a “work in progress,” with about 40 signups so far.

Auburn’s offense is much more balanced but has performed about the same overall compared to Mississippi State. Auburn relies on its strong running game, averaging 183 yards per game. The Tigers have scored 31.3 points per game, but that figure also includes the first two games of the year where Auburn put 60+ on weak competition. Auburn’s main running threats come from Tank Bigsby and Jarquez Hunter, with 735 and 544 rush yards on the year respectively.

Like their offenses, both teams’ defenses are around average for the SEC. Mississippi State’s defense only allows 322.1 yards per game, fourth in the SEC, yet gives up 25.3 points per game, ninth in the SEC. They have a strong run defense, however, only allowing 102. rush yards per game. A good matchup vs the Auburn rushing attack.

Auburn’s defense only gives up 19.8 points per game, third in the SEC, yet they also give up 361.9 yards per game, ninth in the SEC. What that shows is the Auburn defense is “bend but don’t break.” The Auburn pass rush has been a difference-maker for the defense. It features three players who each have four sacks on the season in Eku Leota, Colby Wooden, and Derick Hall. The pass defense has shown some flaws, however. Auburn has allowed 224.8 passing yards per game this season. Against the Mississippi State air raid, that is a weakness that can be exploited.

Time, Place, Where to Watch

The game kicks off at 12pm EST, 11am CST, at Jordan-Hare Stadium in Auburn, AL. Auburn is currently listed as a 5.5 point favorite with an over/under of 50. Live coverage can be found on ESPN and ESPN Radio.

Jack Shivertaker is a senior at the University of Florida pursuing a degree in Journalism with a focus on sports media.
@JackShivertaker
Previous Dolphins Shock Ravens in Primetime
Next Local High School Teams are Playoff Bound