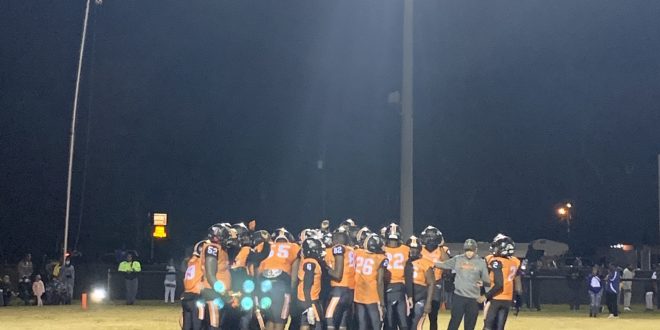 The Hawthorne Hornets (9-0) defeated the Pahokee Blue Devils (8-2) Friday night in the Region 4-1A championship, with a final score of 51-12.

Here are five of the top storylines from Hawthorne’s second playoff victory:

1) Slow Starts for the Hornets

After going down early in last week’s regional semifinals versus Wildwood, the time off was thought to be the culprit for Hawthorne—an early deficit merely the result of a month’s rest. Though, after going down early once again this week, questions arise in the direction of the first-half-Hornets who have found themselves in tight games through the first 24 minutes of each playoff win despite the wide-margined final scores.

“My team … They make my halftime speeches seem awesome, right? But, [seriously], it’s us. It’s us.”

Hawthorne Head Coach Cornelius Ingram spoke after the game on his Hornets’ slow starts and the notion of being a second-half team.

This team knows how to bounce back, and bounce back hard. There’s no doubting that. We’ve seen an unbeatable team in their second-half play. However, with states on the horizon—the semifinals just a week away—coming out of the gate slow is likely not part of the plan for Coach Ingram and his Hornets. They’re going to need a full 48 minutes of their best football as they move on.

Watching Junior Tyler Jefferson, Hawthorne’s quarterback sensation, one simply runs out of words to describe the dominance he continually displays.

Standing at 6’2 and 220 pounds, Jefferson is a freight train. He accounted for the Hornets’ first 30 points through rushing alone. Before Anthony Morgan’s third-quarter pick-six, Hawthorne led 30-12. Four Jefferson touchdowns off of quarterback-sneaks and power play-calls combined with three rushing two-point conversions were the ingredients to his output.

“Throughout the week we already knew that we were going to come into this game powering that football, pushing it straight up the middle,” he explained. “My offensive line and running-backs allowed me to do that. They allowed me to go in and hit ’em in the mouth. They really provided me with those four touchdowns.”

Tyler Jefferson has become Hawthorne’s guy, and they’re going to need him to continue to soar in order to achieve their state-championship hopes.

As great as Jefferson is and was in this game, he was not the most highly-profiled quarterback coming in. Pahokee’s Austin Simmons, the 6’3 and 185-pound freshman, had been tearing teams up. In fact, he has already, as a freshman, received an offer from Florida State University.

However, on this night he was unable to make anything happen. The Hawthorne defense has been so incredible all season long, well, they did their number on him and his Blue Devils’ offense.

While the arm talent was clearly there, the wide-outs were not. Hawthorne’s front-line had constant pressure all night, and the secondary couldn’t be shaken. Simmons simply had nowhere to go.

Simmons and his Pahokee Blue Devils scored zero offensive points. Their 12-point total came from a pick-six and kickoff return.

Hornets defensive coordinator Dustin Adkins spoke on Simmons and the defensive game-plan when it came to the young star quarterback:

Clearly, Adkins had a plan and his defense executed. They took away his first option and challenged Simmons to go through multiple reads. Unfortunately for the Blue Devils, he was unable to successfully do so, and, as a quarterback, that’s something you absolutely have to be able to do. You have to be able to move down from option one, to option two, to option three and so on as a play unfolds. Making complex reads quickly is a staple skill for the top playmakers.

Though that’s something that comes with experience, and Simmons is just a freshman which makes him all the scarier for Pahokee’s future opponents over the next few seasons. He is clearly a very talented quarterback already and has all the time in the world to grow. This night, this game against the Hornets should be one he learns from and remembers for a long time.

Jefferson isn’t the only junior offensive star for Hawthorne. Brian James has been quietly putting together one of the best years for any high school running back in the state of Florida.

James was just on the brink of breaking the 1000-yard mark after a three-touchdown performance in their regional semifinal game against Wildwood. Going into the final quarter of this game, it seemed that he’d have to wait at least another week before reaching the milestone.

However, to open the fourth, James broke through the Pahokee front-line to find an ocean-sized gap on the outside. He’d go 52 yards to the hole, putting Hawthorne over 50 points on the night and himself over 1000 yards on the season – a storybook ending to this matchup for the Hornets.

While his huge touchdown run is the prettiest storyline, digging a little deeper will reveal what his largest impact on this specific game truly was.

Coach Ingram, while speaking on James’ feat, mentioned and elaborated on his blocking as a critical component of the team’s success.

“He was giving up his body. I’m talking about some of the best blocks I’ve seen as a football player.”

Coming from his coach, Cornelius Ingram, a former Gator and NFL tight end who has seen as much as a football player as anyone, this is very, very high praise.

Tyler Jefferson, as aforementioned, also credited James’ blocking as part of his success rushing the football.

Having a running back who is not just able to block so well, but actually enjoys and has pride in it, is an invaluable treasure for a football team and coach. James has been a Swiss-army knife all season for the Hornets.

5) The State Semifinals Are Set

Scheduled for Friday, December 3, the Hawthorne Hornets will host the Chipley Tigers (9-3) in the class 1A state semifinals. They’ll fight for a chance to reach the state finals and play the winner of Madison County vs. Chiefland.

As the higher seed, and with being undefeated, the Hornets would be the betting favorite. However, the Tigers just had by far their best win of the season and will come into Hawthorne riding high on as much momentum as any team in the state, in any class. So, the Hornets are going to have to show up and they’re going to have to show up early. Another pedestrian first-half may just be the one to bite them.

Fortunately for Hawthorne, they will have what has become a game-changing advantage for them; home-field.

Coach Ingram spoke volumes about the Hawthorne faithful and gave great insight into what playing in that stadium means to him and his guys.

Hawthorne. Chipley. State semifinals. Finals appearance on the line. The electricity can be felt just thinking about it. This will not be a game that people are going to want to miss.

Zackary is currently studying Journalism: Sports & Media at the University of Florida. He has years of experience providing multifaceted online content for various news outlets, as well as experience running multiple sports-related social media accounts with high followings. He is now doing work for ESPN Gainesville as a Sports Coordinator/Editor and Producer. He was a Staff Writer and Digital Content Creator in the past. Zackary's planned graduation is May 2024. Please feel free to contact via email at zackaryweiss@ufl.edu or zackweiss48@icloud.com. Links to Zackary's social medias are directly below.
@zackaryweiss_
Previous Gators Women’s Basketball Improves Win Streak to Four Games
Next Pat Dooley’s Grades: FSU vs Florida