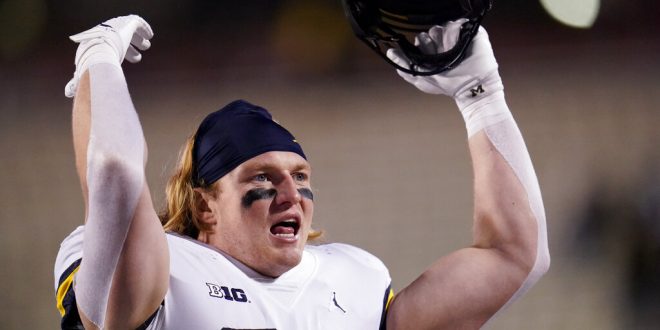 Rivalry weekend has left uncertainty surrounding the playoff rankings with a 42-27 Michigan upset over number two Ohio State and an Alabama overtime win 24-22 in the Iron Bowl.

The ranking has shifted in the most recent AP Top 25 College Football poll after a loss from Ohio State who was ranked second in Week 13. In the AP Poll, Ohio State dropped to number seven after their second loss of the season.

Meanwhile, Georgia and Cincinnati remain the only unbeaten teams following a Bulldog shutout over the Yellow Jackets and a 22-point Bearcats win over the Pirates.

The team to shake up the playoff rankings

In the AP Poll that was recently released, Michigan moved up three spots to number two following their 42-27 win over the Buckeyes.

Big Blue held Ohio State scoreless in the third quarter and capitalized on red zone opportunities. While the Buckeyes controlled more possession time, the Wolverines were able to get key stops on third down and limit the rushing game.

In the College Football Playoff Rankings, there is a big possibility that Michigan could be voted into the number two spot after the recent win.  ESPN Commentator Kirk Herbstreit ranked his top four teams following week 13 below.

The Crimson Tide could drop to number four

Another team that could cause the rankings to shift the Crimson Tide following their 24-22 win over Auburn in quadruple overtime. Auburn held Alabama scoreless for the first three quarters. However, the Crimson Tide tied the game in the fourth quarter.

With a slow offensive start against 6-6 Auburn at the Iron Bowl, Alabama could possibly move down to number four. The Tide have already suffered one loss against Texas A&M.

Auburn started back up sophomore quarterback TJ Finley due to Bo Nix suffering from a season-ending ankle injury. The Tigers’ defense showed up in the first three quarters causing Alabama to remain scoreless on 11 possessions before scoring on a 46-yard field goal. Down 10-3 late in the fourth quarter, Alabama quarterback Bryce Young led the offense down the field to tie the game 10-10. The Tide then took the roar out of the Tigers in overtime.

Throughout the rankings, Georgia has maintained their number one spot. However, the uncertainty surrounding the number two-four spots will be settled tonight as the College Football Playoff Selection Committee ranks the teams in preparation for selection day.