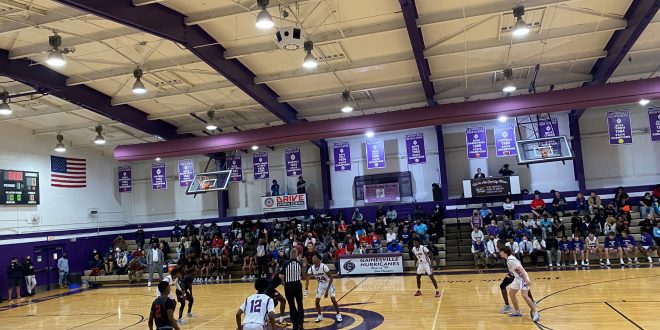 The Gainesville High School Hurricanes (2-0) defeated the Santa Fe Raiders (0-2) Tuesday night 62-61 in overtime. From tip-off to the final buzzer, the electricity in the Purple Palace was second to none. Both teams came out swinging and had the feeling of a playoff game throughout.

With the energy pre-game jumping out of the gym, both teams were eager for the ball to tip-off. Both teams started in a man-to-man press allowing Santa Fe to jump out to a quick 9-2 lead early in the first. Following a corner three by Santa Fe, the Hurricanes were forced to call a timeout.

Coming out of the timeout, the Hurricanes were able to go on an 11-3 run to end the quarter and take a 13-12 lead. This run was large in part because of junior guard Seth Childers. Additionally, Childers throughout the game did a great job of hitting timely shots and running the offense.

Subsequently, the two teams kept going back and forth in the second quarter as well. A few turnovers and another corner three led to them retaking the lead 20-17 early in the second.

3-ball by the Raiders to put them ahead 20-17 with 5 min left in the second. @ESPNGainesville @ThePrepZone pic.twitter.com/OhRJ7kwGjb

The end of the first half consisted of both teams wanting to push the ball. The Raiders were paced by junior Mason Brown who was able to get his team a basket when needed. Therefore, the Raiders were in control in the half-court and were able to take a 31-25 lead going into the half.

Both squads came out ready to roll to begin the third quarter. Dontrell Jenkins of the Raiders did a great job all night of setting up his teammates for easy shots. Therefore, his ability to push the ball off a miss was something the Hurricanes had to adapt to. The raiders were able to maintain their lead throughout a hard-fought third with a 40-38 lead going into the fourth.

With the crowd on their feet, Gainesville was able to take their first lead of the game with a three to start the fourth quarter. After multiple steals, turnovers, and clutch shots, the Raiders found themselves up one in dire need of a stop with a minute left.

Following a timeout, the Hurricanes executed the in-bound to perfection resulting in a foul leading to free throws. He would go ½ from the charity stripe resulting in a tie game. After a miss by both teams on each end, the game was on its way to overtime.

Winner at the Buzzer

No surprise, the whole gym was buzzing during overtime. The Raiders put themselves in a position to win the game by two clutch free throws by Kyren Washington to put them ahead. With the hometown crowd on the edge of their seats, the Hurricanes had 13.5 seconds to get a basket down by one.

With a similar in-bounds set to end regulation, Seth Childers was able to dribble down the court and give a beautiful dish to Vontrell Hankinson to get the go-ahead basket. The final score was 61-60 Hurricanes, thanks to that great final play by Childers and Hankinson. Nonetheless, a great ending to a great game by both teams.

The Raiders look to get back on track this Friday at home against Buchholz.