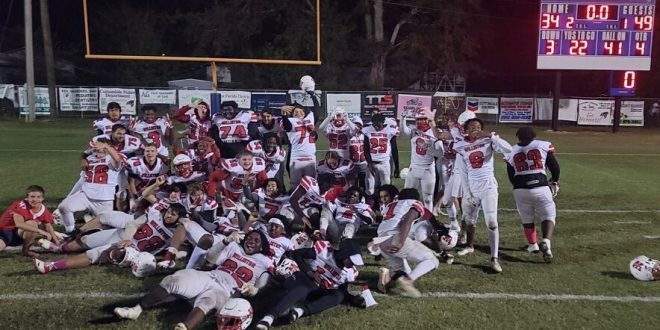 Looking down the Williston High School sideline during a football game, two long braids hanging down from a helmet stand out.

These braids belong to Tabatha Padilla, the only girl on the football team.

“I had always wanted play,” Padilla said. “Then one day I was walking down the hallway with one of the guys and I was joking around with the coach, and I was like ‘hey, you should let me play,’ and he was like ‘okay come to practice’.”

The next day, after clearing it with her parents, Padilla was on the bus with all the guys headed to the practice field.

“I can remember the first day I had to ride the bus to the field, and I was so nervous,” Padilla said. “I sat there, and I didn’t say anything, I could just feel them staring at me. They asked if I was going to be their new water girl and I told them I was going to play. None of them believed me until I got my pads and my helmet.”

After that practice, she officially joined the team. However, joining the team did not immediately mean she was accepted by the guys on the team.

“It took them a while. Because at first they just thought it was weird, but now they treat me as any of them,” Padilla said. “They lost their filter that they usually have with females.”

Part of the Team

Being together on a daily basis and working toward the same goal of bettering the team, Padilla and the guys became closer as the season progressed.

“The practices are a lot of work but that’s where we bond the most,” Padilla said. “We’re tired and we’re sweaty but that’s when we show our real side. The guys are not going to try to hide something if they are hot and sweaty and aggravated because the coach is making us run. They’re going to show their real character and I like that the most because they are all really encouraging.”

Becoming part of the team also means facing criticism from people who believe girls should not be allowed to play football.

Padilla did not let instances like this get in the way of her playing the sport she enjoys. She says she would encourage all younger girls to do the same if they want to play football.

“A lot of the younger girls look up to me now and I take that as a responsibility,” Padilla said. “A lot of people know who I am, a lot of people who I didn’t even know. Sometimes I’ll be walking, and they’ll be like ‘hey Tabitha.”

Being the first girl on Williston’s football team, Padilla had a lot to overcome. What she gains though, from being on the team outweighs any obstacles she faced.

“The best part of it is the brotherhood,” Padilla said. “All the guys. It doesn’t seem like it, but they kind of grew on me, I wasn’t expecting them to. Definitely, the best thing I’ve gotten out of it, the friendship with all the guys.”