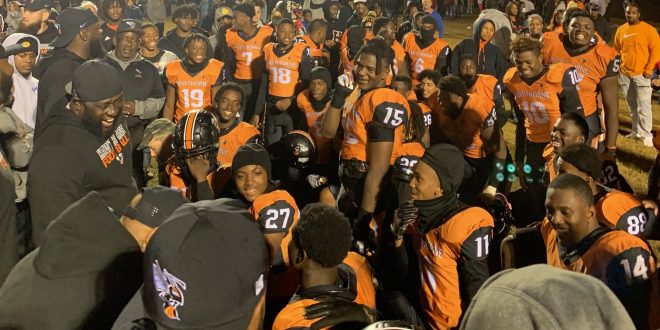 The Hawthorne Hornets will face off against the Chipley Tigers in a Class 1A FHSAA football state semifinal game this Friday at 7:30 p.m. The undefeated Hornets will have home field advantage going into this matchup.

Head coach Cornelius Ingram said the Hawthorne community has rallied around the football team, contributing to the winning atmosphere. In addition, the school, including students, faculty and staff, are supporting the team, changing the feel of the games with their energy.

Ingram knows that Chipley will be one of the most difficult games of the year. However, the Hornets are hungry for the state title after losing to Baker last year in the 2020 championship game.

With that, Hawthorne had a deep run last year with a talented team, and the returning players have made this year possible.

This season, the Hornets were undefeated, beating Wildwood 50-14 and Pahokee 51-12 in playoff games to secure a semifinal position, but it didn’t come easy. Ingram knew there had to be changes made to make it back to the state championship game.

That being said, the Hornets have been in this position before and pulled off a win. Ingram is hopeful that his team can do it again.

The 9-3 Chipley Tigers are a new addition to Class 1A, as they competed in Class 3A last season. The Tigers will look to pull of an upset against the unbeaten Hornets to advance to the state championship game.

Additionally, Ingram said the Tigers will be tough competition because of their new head coach and strong players, including junior wide receiver Daquayvious Sorey, who is committed to play football at Georgia.

The Tigers defeated the defending state champions, Baker, this year in a playoff game 22-7. They will look to keep the momentum going to pull of an upset against Coach Ingram and the Hornets.

The winner of this matchup will move on to the state championship game where they will face either Chiefland or Madison County.

Both Class 1A semifinal games are set for this Friday at 7:30 p.m. The state championship game will take place on Dec. 11 at 7 p.m.