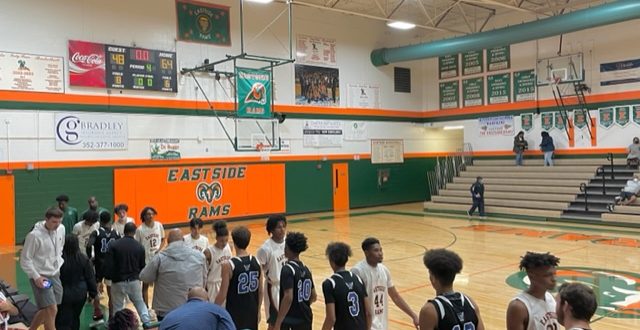 Slow Start in First Half

Eastside tipped off their season to a bit of a sluggish start. Matanza, having already played two prior games, came out hot. The Pirate’s Ty Smith had a strong first quarter, including a corner three to kick things off which forced the Rams to burn an early timeout. Following the timeout, the Rams were able to settle in with a few free throws to cap off the first quarter. After 1, the Pirates held on to a 13-11 lead.

The Pirates continued to have their foot on the gas pedal to start the second quarter. They were able to force early turnovers thanks to a suffocating man press. With shooters in all spots on the floor for the Pirates, they were able to connect on three downtown shots on their war to a 19 point quarter. Similar to the first, the Rams were able to hang in there thanks to five free throws by Kane Smith. After cutting it to a one-possession game, the Pirates ended the half on a 6-0 run, along with a halfcourt heave to beat the halftime buzzer. Consequently, the Rams head into the locker room down 25-32.

Rams Come out Charging in Second Half

The Rams came out with a full head of steam to kick off the third quarter. Point guard Calvin Cooper was able to get two quick steals resulting in points. On the following possession, senior Julius Owens had a monstrous putback dunk leading to a massive momentum shift. Cooper came out of the half doing a great job handling the press and pushing the ball down the court all while facilitating to his teammates. After a big third quarter, offensively and defensively, the Rams were able to take a 40-39 lead going into the fourth.

Following their big quarter, Eastside followed by opening the fourth going on a 10-4 run by pushing the ball in transition. Ben Davis accounted for 8 of his 13 points on the night during this run by knocking down timely threes and penetrating the paint. Eastside never looked back. They continued to push on a Matanza team who had gotten cold from outside. Furthermore, Quashawn Brittingham hit a dagger three with a minute all to put it away for the Rams. The final score after a massive second half by the Rams was 64-48.

Rams hit a dagger 3 up 12 with a minute to play. pic.twitter.com/TxtzqlknCY

After catching up with coach Williams, he touched on how his team handled the slow start and persevered.

“This a young team we got, they really started to understand what was going on and they caught up with the pace and went on from there.”

This young Rams team showed what they are capable of for the rest of the season in the second half. Eastside hopes to keep things rolling on December 9th at home against Santa Fe.