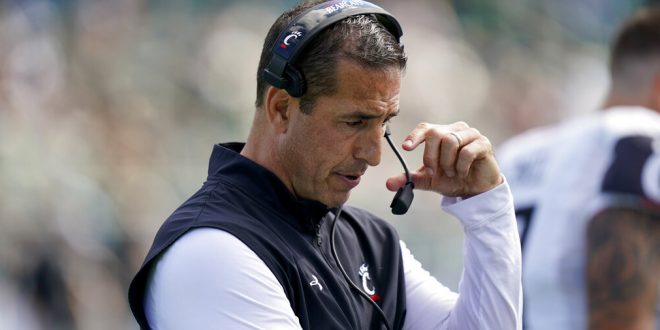 An undefeated season. A second consecutive AAC Championship title. The Bearcats have shined throughout the regular season to become one of the top college football teams in the nation. And now, Cincinnati makes history as the first non-power conference team to make the College Football Playoff.

It was a packed Saturday evening in Nippert Stadium as Cincinnati hosted the American Athletic Conference game for the second year in a row. The Bearcats took on Houston for the championship title. The game marked Cincinnati’s third straight finals game appearance. At the half, odds remained close for both teams as Cincinnati clinched on to a 14-13 lead.

However, the Bearcats dominated with 21 points in the third quarter as Houston failed to retaliate. Running back Jerome Ford rushed for 187 yards and two touchdowns. In the end, the Cougars only found seven additional points in the second half, leaving Cincinnati with a meaningful 35-20 victory. Players and fans swarmed the field as the clock hit zero and the Bearcat’s win became official.

I have never seen a scene like this !!!!!enough said !!!!!@GoBearcatsFB pic.twitter.com/7xX63trWIV

Cincinnati Head Coach Luke Fickell was speechless after the performance his team gave. He was especially proud of QB Desmond Ridder, who threw 190 yards and three touchdowns in the game. Fickell honored Ridder’s performances during a post-game interview.

The Bearcats AAC win earned them the No. 4 spot in the final College Football Playoff rankings. As a result, they will face the No. 1 ranked Crimson Tide in the Cotton Bowl in Arlington, Texas on December 31st. Under Coach Nick Saban, Alabama has earned six national titles since 2009. They most swept the then top ranked Georgia 41-24, proving dominance on even the best teams in the nation. Quarterback Bryce Young proved strong against the Bulldog’s defensive line. He threw for 421 yards for three touchdowns, and ran an additional 40 yards with one more score. He will be a key player for Alabama this post season. Although, Alabama had nail-biting wins over LSU, Arkansas, and Auburn, their 12-1 season record shows their capability to pull off victories despite surrounding circumstances.

Cincinnati will enter their next game as the underdog. Not only have they never been in the playoffs, but they’re also the first team from a Group of 5 conference to earn a chance at a national title. They face the far-fetched task of knocking down the Crimson Tide. However, they finished the regular season as the only undefeated FBS team left standing. Coach Fickell believes his team deserves their spot in the playoffs. After their AAC win, Fickell explains the Bearcats have done everything they’ve been told to do. With their determination and proven success, Fickell says his team “deserves everything”.

Ridder will be a valuable asset for Cincinnati entering the Playoff. He has been named AAC Offensive Player of the Year for two seasons straight and has never led Cincinnati to a home game loss. As a phenomenal talent, Ridder will go head-to-head with Alabama’s defense to fight for a chance in the NCAA final.

Overall, Cincinnati established their best season in program history. With Coach Fickell’s unwavering belief in his team, there is no doubt the Bearcats can continue defying odds in their first ever playoff performance.