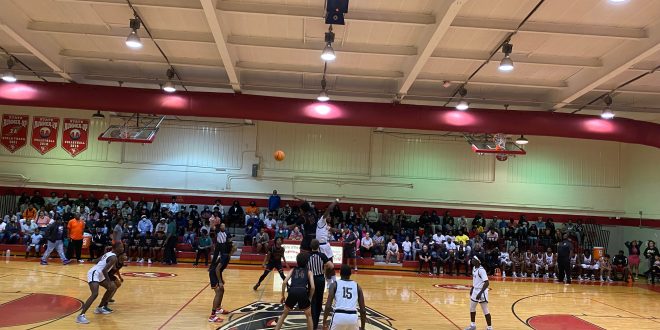 In a packed Santa Fe gym, the stage was set for a cross-town rivalry between the Rams and Raiders. Right out of the gate, Santa Fe set the tone early by establishing a dominant man press. Defense led to offense. The Raiders jumped out to a quick 8-0 start after multiple baskets off turnovers in transition. In addition, the Raiders went on to hold Eastside to 3 first-quarter points while getting 13 of their own on the way to the second quarter.

Roles were reversed in the second quarter. With the Raiders floor general, Don’trell Jenkins, on the bench with two early fouls the Rams were able to take advantage. With some early momentum, Eastside was able to start the second on a 5-0 run. The Rams were able to cut the lead to 1 with 2 minutes left before halftime. Jenkins checked back in and was able to knock down a 3 before heading into the half with an 18-14 lead.

Nice pass to beat the zone here by the Raiders. pic.twitter.com/YboeYlOnmO

Jenkins Takes Over Second Half

Don’trell Jenkins came out firing on all cylinders in the second half.  Impressively, Jenkins was able to cash in on 14 of his 23 points for the night in the third quarter.

Being able to get a rest in the second quarter, did not affect Jenkins’ performance whatsoever coming out of the half. He was able to connect on two threes in the first minute forcing Eastside to call an early timeout. Jenkins continued to keep his foot on the gas by getting his teammates involved; Mason Brown was the recipient of a sweet pass from Jenkins and converted into an alley-oop dunk. He dissected the Rams defense on his way to a 14 point quarter, giving the Raiders a comfortable 37-23 lead going to the fourth.

14 point quarter for Jenkins capped off by this sweet move. 37-23 Raiders heading to the fourth. pic.twitter.com/SxM0tjB2fo

A solid fourth quarter by Santa Fe would lead them to their second win in as many games. Additionally, Don’trell Jenkins paced the Raiders with 23 points while Mason Brown also contributed 12.

Coach Banks reflected on the performance of his squad after the game.

“Be intense. If you prepare that way you will play that way, and it kind’ve showed tonight. Especially in the fourth quarter.”

Santa Fe will have its next test against Ocala Vanguard Saturday, December 11th.