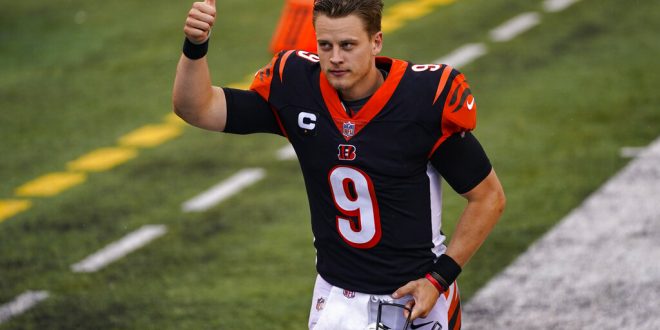 Burrow Leading Bengals Back to Playoffs

When the Cincinnati Bengals selected Joe Burrow with the first overall pick of the 2020 NFL Draft, many thought he would be the man to turn a franchise middling in mediocrity around. Some might have thought he would have the team back to a winning record in his second season. But it would be ludicrous to think he could lead the team to a playoff berth in the seemingly loaded AFC North division.

Still, the Ohio native silenced the doubters. The AFC North division title is locked up and a top-four seed in the playoffs is guaranteed; Burrow has made a name for himself in just his second season on the job.

Besides Burrow, one of the biggest playmakers on the Bengals explosive offense this year has been rookie wide receiver Ja’Marr Chase. After playing college ball with Burrow at LSU, winning a national championship together and helping Burrow to a Heisman trophy, the duo has reunited in Cincy’. Chase looks poised to win Offensive Rookie of the Year, totaling over 1400 yards and ten touchdowns.

Chase, along with the supporting cast that Bengals general manager Duke Tobin assembled, put confidence in Burrow that the team had potential before even playing a snap of football.

Burrow showed his leadership in his time in Baton Rouge, and that trait has quickly translated to the professional level. Despite playing with older players than him, Burrow has taken command in the Cincinnati locker room. Additionally, he has earned the respect of his fellow teammates.

As the team prepares for the postseason, that leadership will be put to the ultimate test.

Burrow appeared to suffer a leg injury in the final moments of a victory over Patrick Mahomes and the Kansas City Chiefs on Sunday. He did not return to the game. While fans expressed worry about his availability, the quarterback said that he is fine; he could play this week if he needed to. Because the team has already clinched the division, though, he will sit out the week.

The 25 year old from Athens, Ohio, is taking full advantage of the rest week; with the season he has had, he deserves it.

Carson Cashion is a second-year student at the University of Florida, and has a major in journalism with a specialization in sports and media. Originally from the Orlando area, Cashion has covered the UF Gymnastics team as well as Oak Hall athletics for ESPN Gainesville.
Previous Magic Fall Late Against Sixers, Lose Seventh Straight
Next Jaguars’ End To A Rough Season