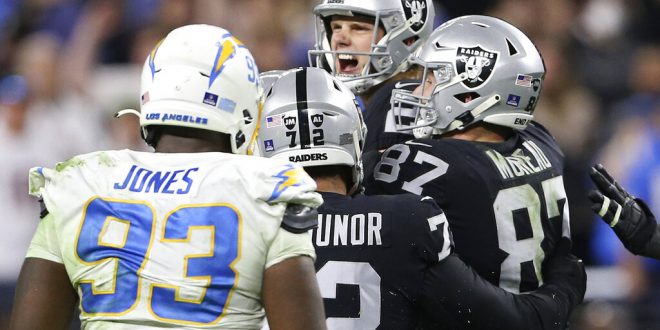 A Look At The AFC Playoff Bracket

The AFC playoff field is officially set as we enter into the final stretch of the road to the Super Bowl. On Saturday, the Raiders will kick-off against the Bengals at 4:30 p.m. Later that evening, the Patriots will travel to the Bills for an 8:15 p.m. game. Finally, on Sunday the last wild card game will feature the Steelers at the Chiefs with an 8:15 p.m. kickoff.

First up this weekend, the fifth-seeded Las Vegas Raiders will travel to the fourth-seeded Cincinnati Bengals. The Raiders were able to clinch a playoff berth after defeating the Chargers in thrilling overtime fashion. Meanwhile, the Bengals reign as the North Champion and prepare to host their first playoff game since 2015. The two last matched up in Week 11 of the regular season where the Bengals defeated the Raiders 32-13.

Next up, wild card game two will see the New England Patriots travel to the Buffalo Bills. The sixth-seeded Patriots head into the post-season coming off of a loss to the Miami Dolphins putting them down in the wild card slot. The Buffalo Bills are back-to-back East division champions after beating the Jets and enter the playoffs as the three seed. This match-up will be the third time the teams have faced each other this season and will break their 1-1 record.

The last wild card match in the AFC features seventh-ranked Pittsburg Steelers and the number two-seeded Kansas City Chiefs. The Steelers made it to their wild card by somewhat of a miracle. Pittsburg was able to defeat Baltimore, but it was not until the Jaguars upset the Colts this past weekend that solidified the Steeler’s spot in the wild card. Meanwhile, the Chiefs are champions of the west after defeating Tennessee and going 12-5 this season.

The Tennessee Titans defeated the Texans and locked down the number one seed and earned themselves the first-round bye. The Titans will now enjoy home-field advantage, and an extra week to prepare for the postseason.

Parker Welch is a Senior at the University of Florida majoring in Sports Media at the College of Journalism & Communications.
@parkerrwelch
Previous Dolphins End the Season with a Win
Next Pat Dooley’s ‘Back 9’ Jan 10th