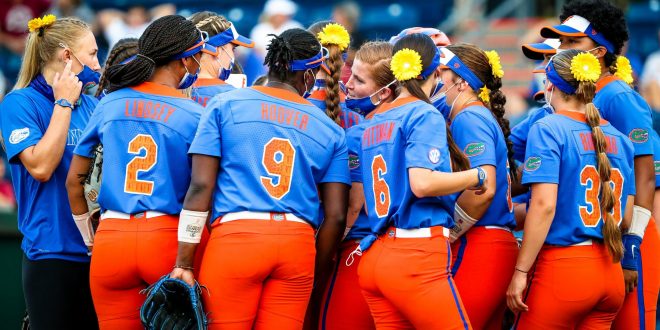 Florida softball continues its undefeated season with a win over Oakland Saturday night at a tournament at UCF.

Natalie Lugo got the start in the circle for Florida and she promptly gave up a lead off home run to the Golden Grizzlies, but Lugo stayed strong and pitched very well after the big blow.

T1 | Oakland gets a leadoff home run on the first pitch, but Lugo settles in to retire the next three and picks up a pair of strikeouts looking along the way.

In fact, Lugo did not allow another Golden Grizzlies hit. She struck out eight and walked only two and the Gator defense played at their A-game, shutting down Oakland for the rest of the night. Reagan Walsh and Charla Echols combined to make some nice defensive plays over the course of the game.

Florida’s defense has been an integral part of its unbeaten season so far, and the team seems to understand that. In fact, it’s been a staple of coach Tim Walton’s teams while he’s been the head coach at Florida.

Rack Up The Runs

The Gator offensive has been on fire this season as well, putting up 109 runs so far this season. Saturday was no exception, with Florida dropping six on the Golden Grizzlies.

The scoring started early for the Gators, with Echols punching a single up the middle to score both Skylar Wallace and Hannah Adams.

The bats went quiet until the bottom of the fifth, when Adams hit a well needed double, driving Kendra Falby and Katie Kistler home. Later, Echols came up after the Adams double, and shot a fly ball to center field, allowing Adams to make her way to home. Walsh made her way on base on a single, setting up Avery Goelz to send her in on a single to right field.

The defense took over the game from that point on, and never looked back. The two sides of the ball played their part exceptionally, and gave Florida its 14th straight win, and moved them ahead in the UCF Tournament.

The UCF Knights Tournament comes to a close on Sunday and the Gators will play a doubleheader.  UF will face James Madison at 1 p.m., followed up by the hosts, The UCF Knights, at 4 p.m.

Another great day at the ballpark‼️ #GoGators