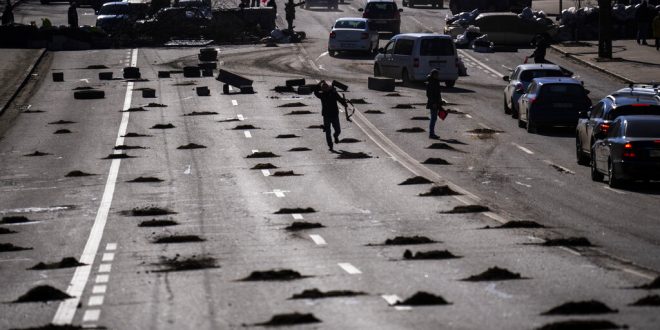 Cars are stopped at a roadblock set by civil defensemen at a road leading to central Kyiv, Ukraine, Monday, Feb. 28, 2022. Explosions and gunfire that have disrupted life since the invasion began last week appeared to subside around Kyiv overnight, as Ukrainian and Russian delegations met Monday on Ukraine’s border with Belarus. It's unclear what, if anything, those talks would yield. (AP Photo/Emilio Morenatti)

Other sports bodies are already taking action. Notably, FIFA has announced that Russia will be banned from any of their future sporting events. Now Russia, former host nation in 2018, will be removed from the 2022 World Cup in Qatar. Conversely, the Russian men’s national team is in the middle of group qualifications. Explicitly, several countries such as Poland and the Czech Republic  refuse to face Russia in future games.

Similarly, the Union of European Football Associations (UEFA) has decided to suspend Russia for any future events such as the Europa League, Champions League and EURO 2024. So, 2022’s Champions League final will be moved from St. Petersburg to Paris.

UEFA has today decided to end its partnership with Gazprom across all competitions.

The decision is effective immediately and covers all existing agreements including the UEFA Champions League, UEFA national team competitions and UEFA EURO 2024.

The International Ice Hockey Federation (IIHF) is also removing all Russian and Belarusian national teams from future competitions. Markedly, Russia will have its hosting rights removed from the 2023 World Juniors competition.

The IIHF Council has suspended all Russian and Belarusian national and club teams from IIHF competitions until further notice and withdrew the hosting rights of the 2023 #WorldJuniors from Russia.

This is not the first time Russian teams have been removed from international sporting competitions. According to ESPN,

“FIFA and UEFA expelled Yugoslavia from its competitions when war broke out in the Balkans.”

Currently, Russia has not made an official statement on the decisions made by these international sports bodies.