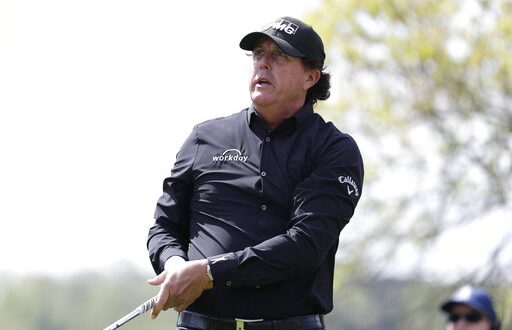 It isn’t often Phil Mickelson finds himself on the wrong side of media headlines.

Mickelson has been a fan favorite throughout his career. Notably, he has won six majors with 45 PGA Tour victories. Additionally, fans felt strong connections towards the California native in part due to his lackadaisical attitude.

In February, Mickelson has felt major drawback. After making comments on the Saudi Arabian Government and newly proposed Saudi Golf League he has found his sponsors sinking faster than a 12-foot put.

KPMG is the first sponsor to drop Mickelson after a report was made that it “mutually” parted ways with the golfer. Explicitly, the company announced this in a report.

“KPMG U.S. and Phil Mickelson have mutually agreed to end our sponsorship effective immediately,” the report said.  “We wish him the best.”

“We made the decision to go our separate ways and end Amstel Light’s partnership with Phil Mickelson.”

Now,  two of his biggest sponsors, Workday and Callaway, are distancing themselves from the lefty. First reported by Golf Digest, a Workday spokesperson explains the situation and drop of Mickelson, a client since 2017.

“At this time, Workday and Phil Mickelson have mutually and amicably agreed to not renew our brand sponsorship that ends this March. We want to thank Phil for his great contributions as a Workday ambassador, both on and off the course. And we continue to wish him and his family all the best.”

In a report by Golf Channel, Callaway announced that they are temporarily suspending its sponsorship with the ability to re-new in the future.

“Callaway does not condone Phil Mickelson’s comments and we were very disappointed in his choice of words – they in no way reflect our values or what we stand for as a company,” he said.  “Phil has since apologized and we know he regrets how he handled recent events. We recognize his desire to take some time away from the game and respect that decision. At this time, we have agreed to pause our partnership and will re-evaluate our ongoing relationship at a later date.”

The latest domino to fall in the Mickelson saga is that he is no longer the host of the American Express, the PGA Tour’s annual stop in Palm Springs, California. The news was first reported by the Palm Springs Desert Sun.

The PGA Tour confirmed to The Desert Sun on Saturday that Mickelson, who served as tournament host since 2020, will not return to that role in 2023. In addition, the  Mickelson Foundation, formed in 2019 specifically to be the charitable arm of the tournament, will no longer be part of the event, the tour confirmed. The foundation’s contract with the tournament was to run through 2024

Tuesday, Mickelson released an apology to the Saudi Golf League for the comment’s he made in a excerpt in Alan Shipnuck’s upcoming biography. Within the apology he explained that his comments were “reckless” and he was under the impression that they were off the record.

Through it all, Mickelson never once mentioned the PGA Tour, further standing by his original claim of making the tour better.

He also explained that he plans to take “some time away to prioritize the ones I love most and work on being the man I want to be.”

A Statement from Phil Mickelson pic.twitter.com/2saaXIxhpu

The status of Mickelson on the PGA Tour is up in the air. He is not in the field at this week’s Arnold Palmer Invitational, and no announcement has been made about his participation in next week’s Players Championship.

With The Master’s looming in the distance, the question certainly is if he will tee it up. As a three time champion, he has the ability to play, but who knows? If the trend continues, it will be a minor miracle to see lefty on the PGA Tour at all.