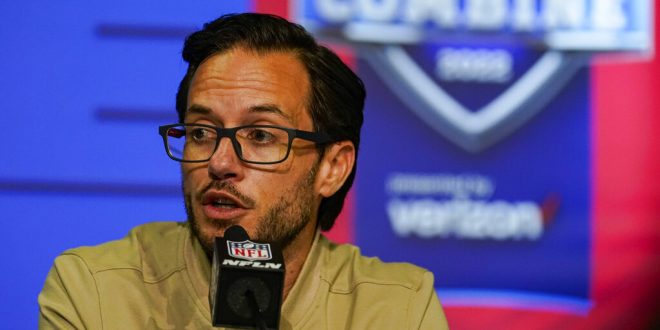 The window ahead of the free agency period is finally here. Players can improve their pay and find a better fit, while teams can improve their roster. Although, none of their moves are official until Mar. 16 at 4 pm. The Miami Dolphins have made big moves in this period, especially in improving the offensive side of the ball. Entering the 2022 season, the Dolphins are not looking to rebuild, but they have missed the past five playoffs. So far, the Dolphins have had four major signees. However, there is still time for Miami to make a few more moves.

With the second most cap space entering free agency, the Dolphins, like the Jaguars, continue to be active.

Ogbah had an impressive 2021 season, with 9 sacks and 12 passes defended. Coming into this offseason, there were rumors that the Dolphins and defensive end Emmanuel Ogbah were going to part ways. However, new Head Coach Mike McDaniel reassured that he had no intention of letting Ogbah go.

With early negotiations, the Dolphins were able to sign Ogbah to a four-year deal. After securing the defensive side of the ball, they moved on to the offensive.

After resigning their defensive end, the Dolphins made a big move to improve their offense. Chase Edmonds has spent the last four seasons with the Arizona Cardinals and will now make his way to South Florida. In the 2021 season, he rushed for 592 yards and had two career highs of 9.7 rush attempts and 116 carriers. Coach McDaniel believes Edmonds could be exactly what he needs to get the best out of their young quarterback Tua Tagovalioa.

After being ranked 30th in the NFL for rushing last season, there was a clear need for a change and improvement. Edmonds has the abilities they are looking for and could help the Miami Dolphins turn things around.

Miami Dolphins and RB Chase Edmonds reached agreement on a two-year, $12.6 million deal that includes $6.1 million guaranteed, per his agent @DrewJRosenhaus. The former Cardinals’ running back is headed to Miami.

Cedrick Wilson gets a Three-Year Deal

With the Dolphins intending to boost their offense, their eyes turned to wide receiver Cedrick Wilson. After Michael Gallup was injured in the 2021 season for the Cowboys, Wilson took the opportunity to step up and make himself known. This resulted in him having the best season in his professional career. He ended the season with six touchdowns and 45 total receptions to go along with 602 yards. Although he is not considered the best wide receiver the Cowboys had, Cedrick Wilson averaged the 17th-most yards of separation and 14th-most yards after the catch in 2021.

Wilson agreed to a three-year deal with the Dolphins that is currently worth $22.8 million, only with $12.75 million guaranteed.

The Miami Dolphins are signing Wide Receiver Cedrick Wilson Jr. the 6’2” pass catcher had his best career year in 2022.

Here are a few of his highlight plays. #FinsUp pic.twitter.com/4zVCAG3gYx

Not far behind Wilson follows the Cowboy’s guard Connor Williams to South Florida. Since the Dolphins are considered one of the worst teams in pass-blocking, Williams is a key player in that department. However, he is a player that comes with strengths and weaknesses. Connor Williams is considered the most penalized guard in the NFL, collecting 16 penalties in the past three seasons. Although many hesitate with this information, the Dolphins believe he could help turn their offensive line around in the upcoming season.

Williams agreed to a two-year deal with the Dolphins that is worth $14 million, only $7.5 million is guaranteed.

Miami fans, the OL help you’ve asked for has started to arrive.

After focusing elsewhere on Day 1, #Dolphins make their 1st move to revamping the much-maligned OL on Day 2 of free agency with G Connor Williams and attention now goes to OT market @nflnetwork: pic.twitter.com/OHkNN1Byhz

The Miami Dolphins were a story of ups-and-downs last season. They finished 9-8 but fell short of the postseason despite having back-to-back winning seasons for the first time in about two decades. With these moves and a new coach at the helm, Miami will look to break into the playoffs.

@_vanessa_sanch
Previous MLB is Back in Full Swing
Next A Look into Free Agency: the Buccaneers