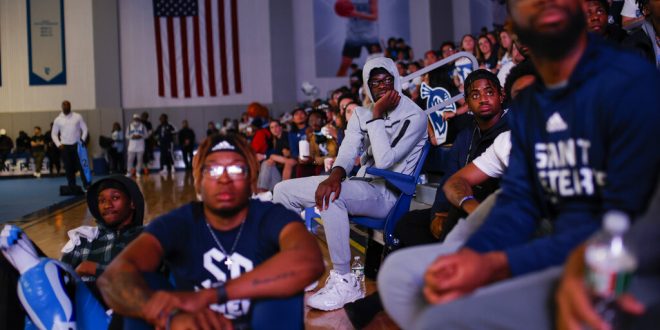 While Saint Peter’s Cinderella run has come to an end, the Peacocks have nothing to be but proud.

When No. 15 St. Peter’s entered the NCAA Tournament, no one was expecting the outcome achieved. Yes, the Peacocks’ run may have come to an end, but they made history along the way. Head Coach Shaheen Holloway talks about how they shocked the world.

The Peacocks Cinderella run began when they took out No. 2 seed Kentucky in the first round 85-79.  Surely, they didn’t stop there with a 70-60 win against No. 7 Murray State in the second round to advance to the Sweet 16. As the pressure started to build for the Peacocks, they beat Purdue with a final score of 67-64 becoming the first No.15 seed to advance to the Elite Eight. The Peacocks then met with No.8 UNC where they fell short with a final score of 69-49.

Holloway talks about the disappointment and how they didn’t expect to fall short.

While the disappointment is prominent across the team, the Peacocks will keep their heads up and focus on moving forward. Now, Holloway is focusing on supporting his team through this heartbreak and making sure they understand what they did these last two weeks.

Apart from making history, Saint Peter’s touched the hearts of many. Notably, the Peacocks didn’t have enough money to send their cheerleaders with the team to support. Tweeting out “best of luck and wishing we could be there in person,” Peacock TV said that wasn’t acceptable and paid for the cheerleaders to go support their team.

The Saint Peter’s Peacocks are one of the greatest Cinderella stories in history and many won’t forget the fight this team put up to end up where they ended.