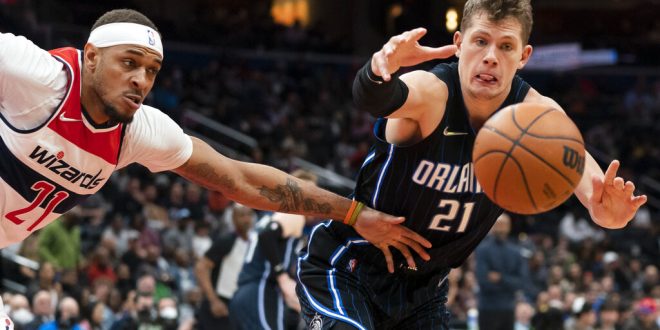 Magic Fall to Wizards on the Road

On a night where Tomas Satoransky had zero points, he still managed to pull off a double-double.

Satoransky went 0-2 from the field but was able to grab 10 rebounds and dished out 13 assists.

The Wizards were led on the scoring end by Kristaps Porzingis who put up 35 points along with Kentavious Caldwell-Pope who added 25. Caldwell-Pope and Porzingis combined for eight of the team’s 13 three-pointers en route to the win. Rui Hachimura and Daniel Gafford also contributed 17 points each.

Putting the W in Wednesday.

The Magic lost their fourth straight game and have a few bright spots to show for it.

Orlando was able to build a lead in the first quarter and went into the second with a 35-28 lead. It slowed down in the second quarter while the Wizards took advantage and ended the half on 16-6 run.

The Wizards didn’t look back in the second half and ran away with it.

Franz Wagner has been one of the few positives of this season for the Magic. Wagner put up 28 points on 11-20 field goals and led the Magic in scoring.

Markelle Fultz, since coming off the injury, has shined for the Magic in his role. Fultz came off the bench for Orlando Tuesday night and had 19 points along with seven assists. He was second on the team in scoring and assists and was able to be the only Magic player without a negative +/-.

Orlando (20-57) came into the game tied with Detroit and Houston for the worst record in the NBA. The loss keeps it in position for a realistic shot to end up with a high lottery pick when the season comes to a conclusion.

Orlando will be back at home on Friday when it hosts the Toronto Raptors.