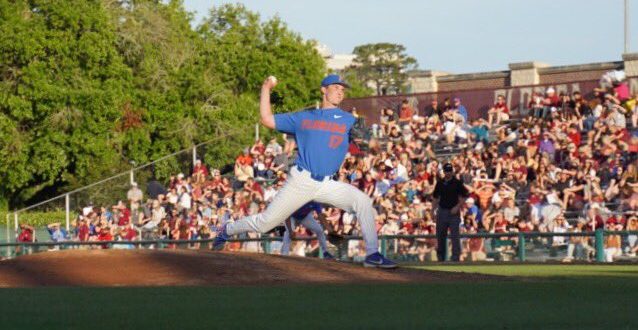 Gators Lose to the Bulldogs on a Walk-off

Georgia rallies to claim game one in the ninth.

Pitching Woes Continue for the Gators

Florida started its ace Hunter Barco to begin this series against Georgia. Barco looked rough starting the night for the Gators. He gave up four straight hits in the first inning including a leadoff homerun and triple. He was able to close out the inning, but the Gators found themselves losing 2-0. However, the Gators were able to tie the game at two apiece by the third.

Barco would navigate through the second and third inning without allowing any runs. Unfortunately for Barco, he gave up another homerun in fourth, which put Georgia in front again by one. Not too much longer after, he was pulled from the game. Barco left after going five innings and allowing three runs on seven hits and two walks. He did manage to strike out six batters before being pulled.

Ryan Slater came in to replace him in the sixth inning and, like Barco, began by giving a no-doubt homerun to the Bulldogs. Though, Slater went on to get the next three outs seamlessly to end the sixth. He also worked his way through the seventh without any real trouble, but in the eighth it got a little scary for the Gators. Georgia had a runner on third with two outs, but Slater made sure that runner did not score by striking out the final batter of the inning.

Head coach Kevin O’Sullivan showed confidence in Slater by letting him start the ninth. He got two outs, but before he was able to get out of the inning he let two batters get on, which forced O’Sullivan to bring in Blake Purnell.

This is where they lost the game. Purnell would give up three runs on back-to-back hits, handing Georgia the 7-6 win over Florida. As much as the Florida hitting did to keep it in this game, it was the relief who would hurt the Gators once again.

Gator Batters Show Their Strength, But it’s Not Enough

These Florida batters may not have been at their best in this game, but they came through for the Gators when they needed them most.

The Gators had early chances in the first two innings to get runs, but could not convert in either inning. Though, when they got to third inning they made sure put runners across home plate. Wyatt Langford, with one out and two runners on base, came through for the Gators by singling through the left side of the infield to score Colby Halter and to bring them within one. Immediately after, BT Riopelle hit an RBI single to left field to knot the game up at two.

The bats would cool off over the next three innings, but began heating up again in the seventh. After getting a runner on, Mac Guscette launched a two-run homerun to tie the game up at 4-4. This was Guscette’s first career homerun with the Gators.

The most important hit of the night came from the leader of this Florida team, Jud Fabian. Fabian with two outs, would send a ball deep over the left field wall providing the Gators with a 6-4 lead over the Bulldogs heading into the bottom of the ninth.

In the bottom of the inning the Bulldogs would walk it off with a hit down the left-field line giving them the win over Florida.