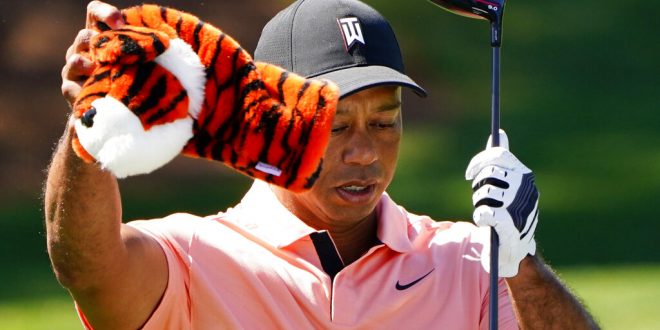 Tiger Woods and The Masters. Two things that go together better than wine and cheese.

While it is not for sure just yet, all signs are pointing towards five-time Masters Champion Tiger Woods teeing it up in the year’s first Major. One of the world’s most polarizing athletes, sports fans have been anxiously waiting for an announcement,  but it seems as if Woods wants to make the world find out for themselves.

Starting last Tuesday, March 29th, word got out that Woods’ private jet hit the skies. Sending social media into a frenzy, media and fans alike began speculating the news that they so desperately wanted to hear, Tiger Woods is playing in the Masters.

The word later got out that Woods made it to Augusta, and anticipation grew. The following five days felt like five years. Sports fans and media were searching for an answer, while Woods seemed to know it all along.

He later released a statement explaining where he is at, and labeled himself a “Game-Time” decision.

I will be heading up to Augusta today to continue my preparation and practice. It will be a game-time decision on whether I compete. Congratulations to 16-year-old Anna Davis on an amazing win at the @anwagolf and good luck to all the kids in the @DriveChipPutt.

Since the tweet was posted, Tiger has made it to Augusta National and began on-course preparation. Staying true to the modern media landscape, video began to surface of Woods on the golf course. Giving the world their first look at his swing and on-course action.

While it is only Monday, and these swings are taking place on the practice ground, all signs are trending towards a Tiger Woods start, which is truly remarkable. Just think, 14 months ago, objective one was walking, and golf wasn’t even in the picture. Flash forward, and he is ripping drivers and swinging the club like nothing ever happened. He is truly one of the most remarkable athletes of all time, and moves the golf needle like no one else can.

If Tiger Woods does in fact compete in this year’s Masters, it is hard to imagine a scenario where he doesn’t succeed. Being the fierce competitor that he is,  the 5-time Masters champ isn’t there to “show face”, he’s there to win.

As crazy as that seems, it can’t be too far fetched. He knows the course like the back of his hand, and has a plethora of winning memories to chose from. After all, he arguably is the greatest golfer of all time.

No matter how the week plays out, whether he tees it up or not. Whether he misses the cut or slips on his sixth green jacket, the moment needs to be recognized and appreciated. A legend competing on the games best stage after a nearly fatal accident, sounds like the plot of an award-winning movie.

So, as previously stated, enjoy the moment sports fans. Moments like this are what makes us all fall in love with sports, and last with us forever. And hopefully, we are graced with the sound of ” Fore please, Tiger Woods now driving” Thursday.