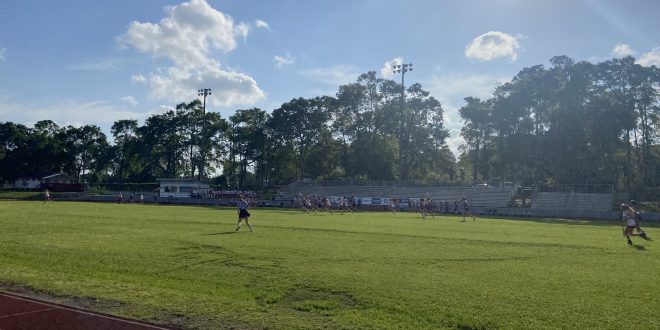 In Tuesday night’s high school girl’s lacrosse match up, the Santa Fe Raiders walked away with a victory over the Gainesville High School Hurricanes with a score of 20-15.

Morgan did not hesitate attacking the goal as she tallied the first two scores for the Raiders. Gainesville’s Amy Bush kept the game close with a goal of her own.

Santa Fe’s Miranda and Emma Maroon joined in the action with quick back to back goals with 13:45 left in the first half. The scoring didn’t stop there as Miranda found the back of the net after an impressive spin move to put the Raiders up 6-2.

The Canes wouldn’t let the Raiders extend the lead that easily. Amy Bush wasted no time responding to Miranda’s goal with a score of her own.

Gainesville’s Evelyn Ragsdale scored off a free position to cut the Raiders’ lead 6-4 with 8:55 left in the first half.

Morgan, Miranda and Amy Bush tallied hat tricks in the first half.

To open the second half, the Raiders and Canes alternated scoring four goals. Gainesville’s Claire Hutton scored to put the Canes within three of the Raiders with 18:58 to play. Hutton’s goal forced a Santa Fe time out.

Coming out of the time out, the Raiders adjusted defensively, resulting in three scoreless minutes for GHS. Amy Bush broke the scoring drought with a goal to cut the Raiders’ lead 13-11. Santa Fe responded with three unanswered goals from Maroon, Miranda and Morgan.

Morgan sneaks in another Raider goal

Despite a five goal deficit with fewer than seven minutes to play, GHS continued to find ways to score. Hutton and Celeste Flory each tallied goals to put the Canes within three scores of the Raiders.

Santa Fe’s Miranda scored to give the Raiders a 17-13 lead with 4:23 to play. After three minutes of scoreless play, Gainesville’s Layne Morton found the back of the net.

The Raiders sealed the victory with goals from Morgan, as well as Faith Marquis. Santa Fe walked away with a 20-15 win over Gainesville.

Coach Cromwell has high hopes for her team as they head into the district playoffs.

The Hurricanes have the opportunity to redeem themselves in the district semifinals against the Raiders on Monday, April 11 at 5:30 p.m.