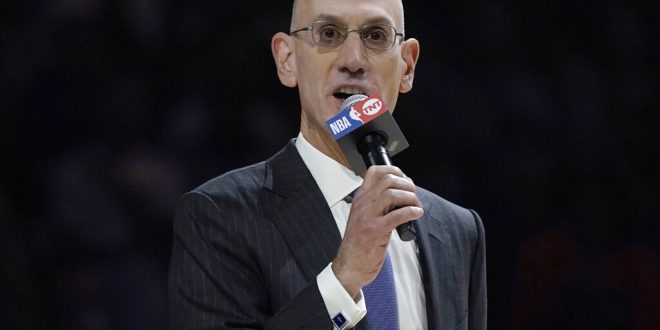 FILE - NBA Commissioner Adam Silver speaks before an NBA basketball game between the Milwaukee Bucks and the Brooklyn Nets on Oct. 19, 2021, in Milwaukee. The NBA plans to keep its next All-Star Game in Salt Lake City, despite its opposition to Utah's ban on transgender youth athletes playing on girls teams. The Utah Jazz are set to host the event next February and Silver said it will stay put as planned. (AP Photo/Morry Gash, File)

NBA Commissioner Adam Silver spoke at a press conference Wednesday evening about a few issues including the league’s star players not playing in enough games. Silver spoke about this following the two-day meeting of the Board of Governors.

Adam Silver hopes that the league and the National Basketball Players Association can work to fix this problem.

Silver talked about possibly changing the league’s schedule. He said “I also have said in the past, if we have too many games, that’s something we should look at as well.”

Silver said at Wednesday’s press conference that one solution could be adding more incentive for the teams to play their star players. He thinks the play-in tournament that was implemented for the 2021 NBA Playoffs was a good start.

Adam Silver says the NBA is "very pleased" with the play-in tournament concept and that the league sees it as a likely "fixture" on the schedule.

The play-in tournament changed the look of the playoffs to make it so 10 teams from each conference play beyond the regular season.

Silver may look for go beyond the play-in tournament. He said the solution “might be through in-season tournaments and changes in format where we can get at it.”

Despite recent anti-LGBTQ+ legislation in Utah, Silver says the league has not discussed moving next season’s All-Star weekend. The league moved the festivities for a similar reason in 2017. The weekend was supposed to take place in Charlotte, North Carolina. Silver says the difference is that the Utah bill “is established.”

Adam Silver identified during Wednesday’s press conference that the league could look at “take foul” and ways of eliminating it.

Adam Silver says the NBA is still looking to change the rules surrounding take fouls, and says that while there’s work to be done with the competition committee that could still happen for next season.

The “take foul” is a tactic teams use to stop the opponent’s fast break before it starts. Silver said the league is “considering making a change for next season.”

The next meeting for the board will take place in July to discuss these issues further.

Jensen Young is a journalism student at the University of Florida. He works as a sports writer for WRUF.com and is the voice of trendings on Wednesday mornings on the WRUF radio station.
@Jensen_Young9
Previous Gator Football Opponent, Utah, to Honor Fallen Teammate
Next Gators Fall Short To In-State Rival FSU