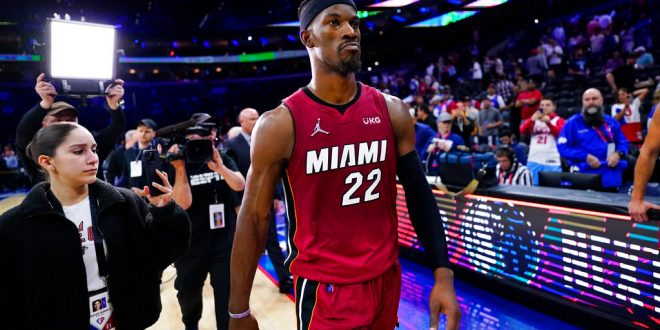 Miami Heat's Jimmy Butler walks off the court after winning Game 6 of an NBA basketball second-round playoff series against the Philadelphia 76ers, Thursday, May 12, 2022, in Philadelphia. (AP Photo/Matt Slocum)

The Miami Heat ran away with game one in the third quarter, coming back from an eight-point deficit at halftime. But can Miami and Jimmy Butler win game two at home against Boston? Butler and Jayson Tatum had an impressive offensive display and rallied both of their squads in crunch time. Although a loss, the Celtics proved able to contest Miami with bench and role players coming alive for the team. The Heat had multiple role players step up, including guards Tyler Hero and Gabe Vincent.

Battle of the star players

Boston’s offensive strategy is quick transition and trusting the ball to star players Jayson Tatum and Jaylen Brown. Both Brown and Tatum are elite-level players, all-stars even. Boston, on paper, has the better lineup and stronger bench. But the Heat’s stifling defense and triple threat players such as Bam Adebayo and Jimmy Butler rally the team as floor generals. Butler and Adebayo, who can perform on an elite level on both ends of the court, are the star players for the Heat with Kyle Lowry out. Adebayo had four blocks in game one but struggled with the Celtics big man Robert Williams.

While both the Celtics and the Heat are team-ball oriented, the Heat lack in superstar talent on the offensive end. If Jimmy Butler can continue to be the shot creator and playmaker his team needs in those clutch third and fourth quarter moments, the Heat have a good shot at the series. Boston had a bad defensive display in game one, partly due to their missing star defensive player, Marcus Smart. This plus the 16 turnovers they accumulated, of which Tatum had seven.

Boston has so many players that are on the cusp of greatness and ready to earn and prove their stripes. With Tatum and Brown as the primary ball carriers with Celtics DPOY Marcus Smart sitting out due to injury, Boston is missing their primary facilitator and defensive presence on the perimeter. The Celtics also can’t be taken lightly as they now have Al Horford to help in the paint tonight and hopefully the rest of the series.

Battle of the Bench

This series will not be decided by those star players though. It will be decided on hustle stats, defense, and the young and hungry role players. Boston’s big man Robert Williams III had 18 points and nine rebounds in game one, showing his presence on the glass. Payton Prichard another upcomer for Boston, with 18 points and shooting 37.5 % from three in game one.

Miami also has young guns that are putting on a show so far in this series Tyler Herro, Max Struss, and Gabe Vincent. Each one of these guys, while not all-stars, are playing at an insanely high level against such a defensive team as Boston. While Herro didn’t have his best game shooting percentage-wise, he gave his team 18 points that they severely needed. Vincent put up 17, and Struss put up 11 on phenomenal shooting from beyond the arc.

It all changed at halftime.

Miami HEAT basketball was on full display after that. pic.twitter.com/FWHOIkw1ro