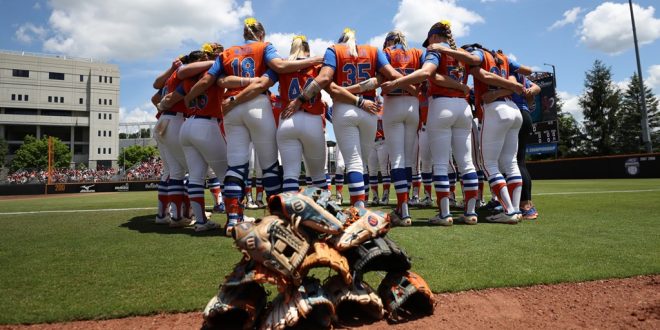 The Florida Gators softball team defeats Virginia Tech 12-0 on May 29, 2022 in game three of the NCAA Super Regional to advance to the Women's College World Series to play OSU. (UAA Photo by Hannah White, via floridagators.com).

On Thursday, Florida Gators softball opened the Women’s College World Series with a 7-1 victory over the Beavers of Oregon State at the Hall of Fame Stadium.

Lugo to the Rescue

The Gators got into a jam in the first two innings behind freshman starter Lexie Delbrey. The Beavers took a 1-0 lead in the first. Then, Delbrey loaded the bases with no outs in the second causing Gators Head Coach Tim Walton to send Natalie Lugo in for relief. Things quickly took a turn for the better as Lugo came to the rescue, sitting the next three batters down and leaving three runners stranded.

T2 | Lugo enters the game with the bases loaded and works out of the jam!

Florida’s offense sparked in the bottom of the second. Reagan Walsh and Cheyenne Lindsey led things off with a pair of back-to-back singles. The two advanced on a Katie Kistler groundout and scored when Avery Goelz smacked a hard grounder down the first baseline and reached on an error by first baseman Frankie Hammoude. The Gators made their way on the board, taking the lead 2-1.

In her next time up, Goelz ripped an RBI single up the middle, allowing Kistler and Lindsey to score. Florida extended its advantage to 4-1 in the bottom of the fourth.

The Gators’ offense continued to dominate in the fifth as Charla Echols homered to center field.

B5 | @charlaechols with her fifth home run of the season extends the lead!! #GoGators

Following the deep shot, Lindsey and Kistler scored on RBI singles off the bats of Cali Decker and Goelz.

The Gators dominated the Beavers with a final score of 7-1.

The Gators hammered out 13 hits against the Beavers in Thursday’s game, making it the sixth game out of seven in the NCAA Tournament where the team recorded 10 or more hits. In seven NCAA Tournament games, the Gators are hitting .405 and averaging 7.7 runs and 10.7 hits per game.

Lugo was outstanding in relief as she sat down 18 of the 19 batters she faced. During Lugo’s six innings, she allowed just one hit, walked none, and struck out six. The stats Lugo has six appearances during the 2022 NCAA Tournament with an impressive 14.1 innings, 0.00 ERA, 14 strikeouts, and one walk.

In addition, Lindsey put up a spectacular performance with a 3-for-3 night and three runs scored. The Florida senior gained her 20th multi-hit game of the season.

Goelz came in hot at the plate, accounting for five Florida runs. The career .243 hitter has totaled 12 RBI from the regular season, with six RBI during the last two games (in back-to-back games with three). Thursday night’s game tied her career-high in RBI (three).

Walton will reunite with Oklahoma State Head Coach Kenny Gajewski who was his former assistant coach at Florida. Walton and Gajewski also played ball together at Oklahoma. The two won a national championship together on the 1994 Sooners squad.