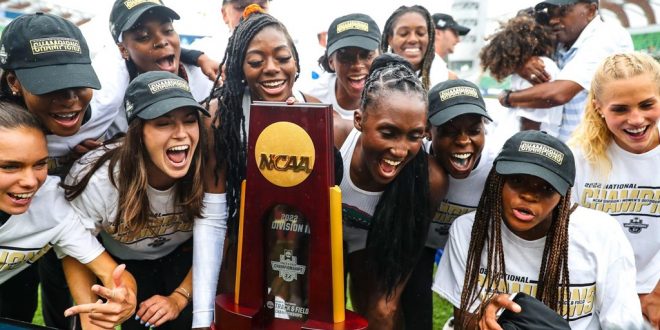 On Saturday, the Gators Women’s Track and field team made history.

Florida came in at No. 2 and walked out as No. 1, defeating Texas 74-64 in the team title race. For the first time in program history, the women have clinched an outdoor national title. This also marks the first NCAA Indoor/Outdoor sweep on the women’s side in the program’s history. The only other Gators team to accomplish this was the Florida men’s team in 2012.

The women weren’t the only ones to walk away with the NCAA Outdoor Championship team title this weekend. The Gator Men also took home the championship trophy after the finals on Friday. Florida is the first program since Oregon in 2015 to secure both team titles in one weekend.

The Gators won three of the four NCAA Track and Field Championship meets during the 2022 season. Florida became the third program to win three team titles in one season. LSU in 1989 and Oregon in 2014 and 2015.

Breakdown of the Meet

On Thursday Talitha Diggs set a lifetime record, as well as the fastest time ever, to qualify into the finals for the 400 meter (50.08). On Saturday she set a new record of 49.99. Diggs became the fifth collegian ever to run under 50 seconds in the 400 meters. She secured the indoor title and now she has the outdoor title to go with it.

Diggs is the second woman in program history to win NCAA titles in the same running event during the indoor and outdoor seasons of the same calendar year. Her aunt, Hazel Clarke(1998, 800 meters) was the first.

The Undisputed Queen of the 400 Meters! pic.twitter.com/nFOuBD2hzq

Next up was Imogen Barrett (4th) and Gabrielle Wilkinson (9th) in the 800 meter. Both had All-American performances. Barrett gave Florida five points with her fourth-place finish.

Anna Hall became the very first Heptathlon champion in Gator history. This year Hall swept the indoor pentathlon and the outdoor heptathlon. Hall stepped away from the Heptathlon to run in the finals of the 400 meter hurdles. She placed second with a time of 54.76, scoring 8 points for the Gators. Vanessa Watson finished in seventh place with a time of 56.83. Watson earned two points for Florida and earned First Team All-American.

Sterling Lester ran the 800 meters in 2:12.63 finishing in fifth place and earned a personal best of 5751 points. Jasmine Moore made history on Saturday night. She became the first woman in history to go 8-for-8 on titles in the horizontal jumps (four conference, four national) in the same calendar year.

She is the first woman since Cal’s Sheila Hudson in 1990 to sweep the long/triple jump in both indoors and outdoors.

After the heptathlon and triple jump had finished, the Gators had a 10-point lead over Texas. For Parker Valby this meant that all she needed to do was score one point in the 5000 meters to guarantee the team title. She scored eight.

The Gators are Back in Gainesville Safe and Sound.

Brought Some Hardware Back with Us. pic.twitter.com/8InbXiV1JE

With a time of 15:20.10, Valby finished second to NC State’s Katelyn Tuohy, after holding the lead for quite some time in the 5000 meters. This allowed for Florida to secure the team title before they even ran the 4×400 relay.

The Gators Made History

This season will go down in history for Florida women’s track and field team. This team rewrote 11 school records.

In the 50 years of this program, Gators women’s track and field have now won 51 national event titles, including AIAW titles.

Wednesday marks the first day of the NCAA Outdoor Championships. The meet will occur over …