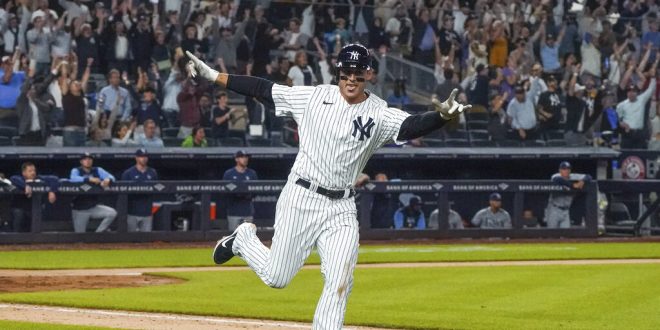 New York Yankees' Anthony Rizzo runs the bases to cheers from fans after his home run during the ninth of the team's baseball game against the Tampa Bay Rays, Thursday, June 16, 2022, in New York. The Yankees won 2-1. (AP Photo/Bebeto Matthews)

The New York Yankees completed the series sweep Thursday night as they defeated the Tampa Bay Rays, 2-1. Anthony Rizzo shined for the Bronx Bombers as he hit a solo home run in the bottom of the ninth to win the game.

Turns out that was 100% his pitch. pic.twitter.com/9tyIZkR6o1

The Yankees were without their starting pitcher Luis Severino after he landed on the team’s COVID-19 injured list Thursday afternoon. Yankees’ manager Aaron Boone confirmed he tested negative and would accompany the team for their weekend series against Toronto.

Clarke Schmidt got the start for New York, pitching three innings on five strikeouts, one hit and no earned runs. Ryan Weber followed with 3.2 innings pitched, two hits and one run after Tampa Bay Rays catcher Francisco Meijia hit a solo home run in the top of the sixth to put the Rays ahead 1-0.

The Yankees responded with an RBI single from Anthony Rizzo to tie the game, driving in DJ LeMahieu for the run.

It was a tie ballgame heading into the ninth until Rizzo hit the walk-off home run to secure the win for the Yankees at 2-1. The Yankees finished with four hits on the night, two from Rizzo, and one from Josh Donaldson and Aaron Hicks. Michael King got the win for New York, moving to 4-1 on the season.

Since June 1, the Yankees have only lost one game out of 14. New York extends their home winning streak to 14 games and holds the best record in the MLB at 47-16.  This is their longest home winning streak since taking 15 in a row in 1961 at the original Yankee Stadium.

The Yankees will travel on the road to begin their series against the Toronto Blue Jays Friday at 7:07 p.m.

What’s Next For Tampa Bay

The Tampa Bay Rays fell to the Yankees 2-1 and were swept in the series. The Rays move to 35-28 on the season and sit in third place in the AL East, 12 games behind the first place Yankees.

Rays manager Kevin Cash had this to say following the team’s loss:

We’re frustrated, there’s no doubt losing three ballgames here especially with the way we pitched. We really threw the ball really well. We’re going to get out of this. We’d like it sooner or later but we’d find a way to stay together through these tough times.

The Rays will look to bounce back as they continue they travel to Baltimore to begin their series against the Orioles Friday at 6:05 p.m.