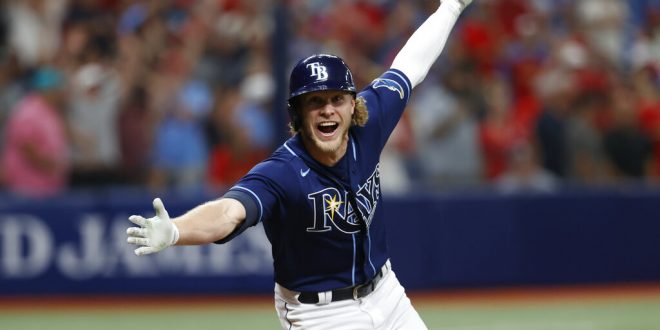 Tonight the Rays head to Yankee Stadium on a mission to halt a team that is on a tear through the league. The game starts at 7:05 p.m.

This match-up will be the seventh of the season between the two teams. The Rays are 14-14 on the road this season and are hoping to make that record positive. The Rays are 20-10 in games where they score at least eight hits, so getting on base will be crucial. The Yankees lead the series for this season 4-2.

The game is at Yankee Stadium, arguably the most significant home-field advantage in all sports. The Rays have a few key players that will have to step up tonight. Players such as Yandy Diaz and Ji-Man Choi that consistently get on base and produce runs will have to stay sharp. In the last ten games, the Rays have gone 4-6 and have outscored their opponents by six runs.

Had to wait 20 minutes… but Ji-Man extends his hitting streak to 13 pic.twitter.com/90leX8dR6T

The Yankees have a monumental start to a season. While currently on a 13-home-game win streak, The team is 24-3 in games where they score at least two home runs which are very feasible. All this while the Rays have allowed 67 home runs this season which is over one a game. With players like Aaron Judge and Anthony Rizzo with a combined 40 home runs on the season so far, it seems that the Rays will be in for a slugfest.

Aaron Judge, as usual, will be the star player for the Yankees with 72 hits and 49 RBIs on the season. But other vital players like Giancarlo Stanton, which has 48 hits and 13 home runs this season, are essential for the team. Anthony Rizzo, the team’s second-leading hitter, including home runs, is also an ace up the sleeve for the Yankees when the Rays head to Yankee Stadium.