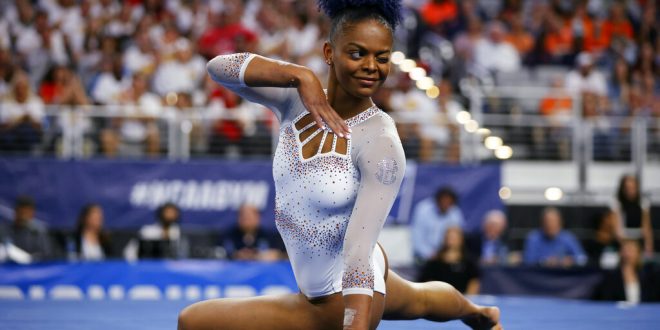 Trinity Thomas has put an end to the speculation and confirmed her return to the Florida gymnastics program for her fifth year of eligibility at the Collegiate Women’s Sports Awards. The 2022 NCAA all-around champion advanced to the final three for the Honda Cup in contention for Collegiate Woman Athlete of the Year. Thomas is only the second Gator to finish in the top three since softball superstar Lauren Hager in 2015. When asked about her future plans, Thomas was happy to share what’s next for her.

“I just started my master’s in health education and behavior,” Thomas said. “And, I’m excited to announce that I will be returning for my fifth year at the University of Florida.”

An eruption of cheers and applause filled the auditorium for Thomas and surly a sigh of relief came from Gator Nation.

The University of Florida is ranked No. 3 all-time with 26 Honda Award recipients. With winners in eight sports, the Gators lead all programs. Thomas won the NCAA all-around title by equaling the meet record of 39.812. A score set by the last UF Honda Award winner, Alex McMurtry, in 2017. Thomas earned a perfect score on every floor routine she performed in the post-season of 2022.

Thomas led the Gators to a runner-up finish at nationals, an undefeated regular-season and the SEC Championship. Head coach Jenny Rowland is poised to have another dominate run in 2023 after retaining Thomas. In 2022, Thomas completed 12 prefect scores on the season. She also has three gym slams in her collegiate career, where she recorded a 10 on each apparatus at least once.

Looking toward the 2023 season

Florida last won the NCAA Championships from 2013-2015 under head coach Rhonda Faehn. Rowland took over the program in 2016 and has led the Gators to 5 Southeastern Conference Championships. The program has appeared in every NCAA tournament since its introduction in 1982.

Going into Rowland’s seventh year as head coach, Florida is sure to be looking to bring home its first championship in eight years. Second place is nothing to be ashamed of, but the orange and blue finished just 0.113 behind the Oklahoma Sooners.

Having been so close to success and coming up short the day it mattered most must have left a bitter taste in Thomas’ mouth and helped lead to the decision of returning. With the veteran back, more leadership will be brought back to the program and a determination to tumble to the top of collegiate gymnastics in 2023.