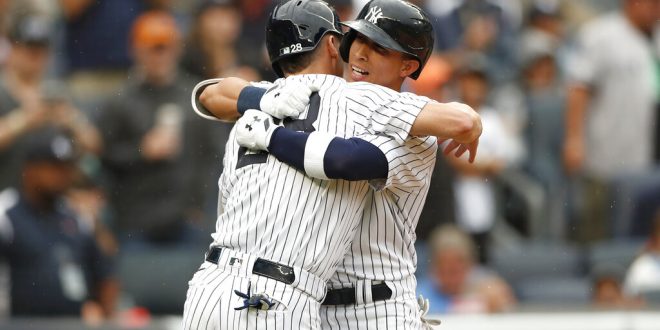 The Rays may have begun the weekend series with confidence, taking down the Yankees 4-2, Friday, but New York had other plans. The Yankees dominated the Rays on back-to-back nights with a 10-3 win on Saturday and a 10-4 victory, Sunday. The Tampa Bay Rays currently sit second in the AL East, with 23 games remaining. The Yankees now hold a 5 ½ game lead over the Rays. That lead stretched to 15 ½ games in July but has dropped to just 5 ½ following the weekend series.

Gleyber Torres owned Sunday night, homering twice for the Yankees as they climbed to a 10-4 victory over the Rays. Torres hit a three-run bomb in the first inning after Aaron Judge singled to center and Giancarlo Stanton walked. Torres followed with a solo homer in the second, instilling the confidence the Yankees needed to power themselves to the weekend series win.

Sunday’s game marked the 12th career multi-homer game for Torres, his second of the season. He becomes the fourth Yankee with 20 or more homers on the season, alongside Judge (55), Anthony Rizzo (30), and Stanton (26). Over the weekend, Torres went 5-for-14 (.357) as the Yankees outscored the Rays, 22-11 over the three games.

Shots in the Second

Tampa had made their first score of the night in the top of the second. A pair of singles off the bats of Jonathan Aranda and Jose Siri allowed Walls to score a run.

Despite the effort from the Rays’ offense, New York owned the inning. Just before Torres smacked his second shot of the night, Stanton homered to right, allowing Kyle Higashioka and Marwin Gonzalez to score. Following the dinger by Torres, Oswaldo Cabrera hit one of his own, marking his first in the big leagues.

The Rays fought in the sixth, putting up two consecutive runs on a Christian Bethancourt double and a Taylor Walls single. While the Yankees continued to lead 10-3, Tampa Bay struggled to make a comeback. It wasn’t until the ninth that Aranda scored another run on a single off the bat of Ji-Man Choi. The Rays could not overcome the heat that New York brought to the plate. With a final score of 10-4, the Yankees took the three-game series.

Tampa’s Trouble on the Mound

Tampa Bay’s pitching staff felt confident entering the weekend matchup. While the Yankees averaged 5.16 runs among the Majors, the Rays had kept them to an average of 2.81 runs per game.

Despite their early confidence, the Rays struggled at the mound as they gave up double-digit runs on consecutive nights. It has been fifteen years since a Rays starter gave up more than nine earned runs to the Yankees, with the last time being in 2007 with James Shields.

Corey Kluber gave up a six-run first inning on Saturday. Kluber’s career start tied for the most runs he has allowed in a single frame during his time in the big leagues. Things did not look any better on the mound for Tampa Bay on Sunday. Luis Patiño got the start, marking his sixth outing of the year. Patiño was no match for New York’s explosive bats as he allowed nine runs with three homers on five hits and four walks in just 1 1/3 innings.

It was bigger than baseball on Sunday as the Yankees took to the field in NYPD and FDNY caps to honor the efforts of first responders on Sept. 11, 2001.

Additionally, Judge had “9/11 Patriot Day” written across the back of his left cleat, with the date of the terrorist attacks written across the right side. Yankees manager Aaron Boone placed a wreath of flowers and plaque beyond the center field wall. Domingo Germán also proudly waved an American flag as he made his way to warm up in the bullpen.

We will always remember. #NeverForget pic.twitter.com/1gXnj6ijCT

The Tampa Bay Rays will look to bounce back as they face the Blue Jays in a five-game series. With the AL wild card on the line, the Rays will look to their pitching staff to lead the way. Meanwhile, the Yankees will prepare to face the Boston Red Sox on Tuesday.

Ellie is a third-year sports and media journalism major at the University of Florida.
@ellie_shreve
Previous Dolphins Dominate Patriots in Season Opener 20-7
Next Bucs Cruise Past Cowboys In Season Opener