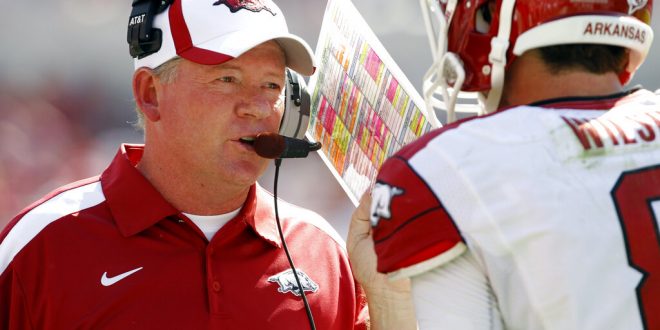 FILE - Arkansas coach Bobby Petrino talks to Arkansas quarterback Tyler Wilson (8) during a timeout against Alabama in the first half of an NCAA college football game on, Sept. 24, 2011, in Tuscaloosa, Ala. Petrino will return to Fayetteville on Saturday, Sept. 17, 2022, when he will lead Missouri State against his former program in a much-anticipated game for an FCS program that he's quickly turned into a juggernaut. (AP Photo/Butch Dill, File)

In a regional rivalry, No. 10 Arkansas (2-0) will host Missouri State (2-0) at 7 p.m. The series dates back to 1911 and since then, the two teams have met seven times. The Razorbacks have won all seven matchups against the Bears. Five wins have come in Fayetteville and two have come in Little Rock.

Missouri State head coach Bobby Petrino used to be the head coach of Arkansas from 2008 to 2012. Petrino led the Razorbacks to three straight bowls and this will be his first time returning to Donald W. Reynolds Razorback Stadium, since he left. Arkansas head coach Sam Pittman praised Petrino for his success during his coaching tenure in Fayetteville.

Arkansas Climbing Their Way to the Top

The Razorbacks football program has had a rough time trying to make a name for itself in the past few years. In the four seasons between 2017-2018 and 2020-2021, Arkansas totaled only four SEC wins.

Back in December 2019, Arkansas hired Sam Pittman as new head coach. He wasted no time getting to work to create a winning team. The 2021-2022 season flipped people’s perspectives on the program as they went 9-4 and finished ranked No. 21. This was a drastic change from their 3-7 record in the 2020-2021 season.

Pittman has seen his players grow on the team since he started at Arkansas.

To lead the offensive line, he said he looks towards returner Ricky Stromberg, who made the Preseason All-SEC First Team, to take the reigns. Since he started with the Razorbacks, Pittman said Stromberg improved on quickness, physicality and knowledge of the game.

At the start of the season, the Razorbacks faced No. 23 Cincinnati and won 31-24. They proceeded to open up SEC play on Sept. 10 against South Carolina, winning 44-30.

In Jan. 2020, Missouri State announced the hiring of Petrino as their new head coach. Since starting there, Petrino brought the Bears to back-to-back post season appearances. The Bears had not been to a FCS playoff in 30 years before Petrino.

The Bears finished second in the Missouri Valley Conference last season, finishing with a record of 8-4.

After two games, quarterback Jason Shelley has recorded 563 passing yards and six touchdowns. Pittman talked about needing to keep an eye on the Bears QB.

In addition to Shelley, running back Jacardia Wright and wide receiver Tyrone Scott lead the Bears’ offense. Wright has 158 rushing yards and Scott has 256 receiving yards. The defense is led by defensive end Kevin Ellis with 13 tackles, and defensive back Dillon Thomas has recorded one interception.

According to ESPN, Missouri has 0.8 percent of winning the game over Arkansas. Kickoff is set for 7 p.m.